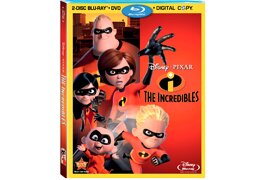 The two-time Academy Award-winning film (Best Animated Feature Film, Best Achievement in Sound Editing) is about a family of superheroes — Mr. Incredible, Elastigirl, Violet, Dash and Jack-Jack — trying to live a regular suburban life, but they get pushed into using their superpowers to save their town from the villain Syndrome.

The set comes with two Blu-rays, one DVD and a disc with the digital copy. All the same extras from the prior two-disc collector’s edition are featured, including the shorts Jack-Jack Attack and Boundin’, plus audio commentaries, all the making-of featurettes, deleted scenes and more.

New to this set are five new featurettes on the Blu-ray. It must have been difficult to add to already comprehensive behind-the-scenes featurettes, but these extras should please fans of the film.

The most interesting and insightful is the featurette “The Incredibles Revisited,” a roundtable discussion with writer-director Brad Bird, producer John Walker and other key crew members who reminisce about the challenges and inspiring moments in making the film, as well as some interesting tidbits such as how the villain Syndrome resembles Bird, who didn’t realize that until too late into production to change it.

A cute featurette, “Studio Stories: Gary’s Birthday,” illustrates through storyboards how the crew solved the problem of having too many distractions with celebrating numerous birthday parties throughout the production.

“Paths to Pixar: Story Artists,” which is part of a bonus feature series on a number of Disney/Pixar home video releases, here shows Pixar story artists, some from The Incredibles, talking about their work, offering advice and sharing how they got to where they are now.

The two other new featurettes, which are less exciting, are “Ending With a Bang: Making the End Credits,” about the creation of the film’s closing titles, and “The New Nomanisan Island Redevelopment Plan,” which is an animated tour of Nomanisan Island as a vacation resort.