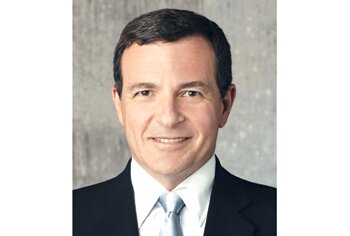 The Walt Disney Co. may be rejiggering distribution of its movies through conventional channels due to evolving technologies and changes in consumer behavior, but it still believes in packaged media.

“The home video business is more challenged than ever before,” Iger said. “And that’s the problem.”

When asked by Rose if home video or disc consumption was dead, Iger said the market was not finished, but rather “just not as healthy as it was.” He said disc sales industry-wide were down about 15% year-over-year.

“People are still buying [discs]. … They’re just not buying as many of them,” Iger said. “And the primary reason, I would argue, is that they have other things to do.”

The CEO reiterated that pay-per-view, electronic sellthrough and transactional video-on-demand have not grown enough to offset declining disc sales.

“Whether the [retail] whole will ultimately get larger than what it was when we were just selling DVDs, I don’t know,” Iger said. “You are still facing a more competitive world.”

The executive cited as an example that when the average person goes home from work and considers how he or she is going to spend their free time, the choice of entertainment options has increased exponentially through more networks, websites, video games, portable media and social networking.

Iger said the younger generation, due to texting and social media, is more prone to peer pressure when it comes to digesting entertainment. He said influences on young people as to whether they are going watch something on TV or go to a movie is more likely to be their friends on Facebook than a review in a newspaper or on TV.

“What we must do is make the product available to them under flexible or expanded circumstances,” Iger said. “And it has to happen, because the simple fact that something is not available in the secondary form or later on doesn’t mean they are going to watch in the first form. It is not going to drive everybody to watch network TV. In my opinion, it is going to drive them to do something other than watch [TV].”