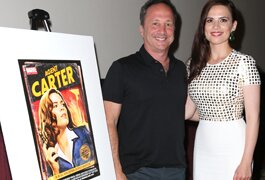 Director Louis D’Esposito and actress Hayley Atwell at the premiere of 'Marvel One Shot: Agent Carter' at Comic-Con.

SAN DIEGO — Having already crafted an unprecedented multi-film continuity, Marvel Studios has been further exploring its cinematic universe with the “Marvel One Shot” series of direct-to-video short films.

The shorts, each running less than 15 minutes, have become a standard extra with Marvel’s “Avengers” movies, beginning with The Consultant, which appeared on the Thor Blu-ray in 2011, followed by A Funny Thing Happened on the Way to Thor’s Hammer on the Captain America: The First Avenger Blu-ray, and Item 47 on the 2012 Blu-ray of The Avengers.

Fans at the 2013 San Diego Comic-Con International got a chance to see the premiere of the fourth short, Agent Carter, followed by a Q&A with the filmmakers. A follow-up to Captain America: The First Avenger, the story depicts an adventure of Peggy Carter (Hayley Atwell) a year after the events of that film.

“This was great because it gave me a chance to show that she can kick butt, which she really didn’t a chance to do much in Captain America,” Atwell said. “I always love seeing strong role models for women … so it’s an honor to be part of that world.”

“The time was right,” said Marvel Studios co-president Louis D’Esposito, who directed Agent Carter. “Captain America: The Winter Soldier is coming out in April, so the release of this on the Blu-ray is great timing.”

Crafting the shorts can be a challenge due to the smaller budgets involved, D’Esposito said.

“We sit around, we discuss, we come up with ideas, and obviously some are not possible because of just the financial constraints,” D’Esposito said.

Producer Brad Winderbaum noted how much the shorts have expanded in scope, after beginning with a pair of modest outings starring Clark Gregg as S.H.I.E.L.D. agent Phil Coulson.

“When we first decided to make short films and realized the Blu-ray would be a great place to do it, we had to prove it, and the Coulson shorts were the right scale. It was worth it,” Winderbaum said. “We had the opportunity to make a slightly bigger short with Item 47.”

According to D’Esposito, Item 47, which explores the aftermath of the alien attack in The Avengers, helped fast-track development of the upcoming “Agents of S.H.I.E.L.D.” television series starring Gregg and executive produced by Avengers director Joss Whedon.

Writer Eric Pearson said budgetary concerns don’t have to hinder using the shorts to expand on characters or elements seen in the features, especially with The Consultant, which was essentially just two characters talking in a diner.

“Let’s figure something out kind of cool and just try to focus on a corner of the universe that could still help expand it and really at least pay off the hardcore fans who love these movies and follow them so closely,” Pearson said.