Disney Has High Hopes for ‘Avengers’ at Retail 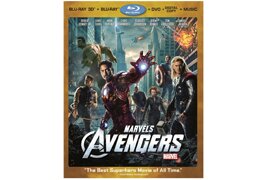 Entering the critical fourth quarter, The Walt Disney Co. is counting on strong consumer products sales — including home entertainment — from Marvel’s The Avengers theatrical blockbuster, which continues to top the domestic box office with $621.5 million in ticket sales ($1.5 billion globally).

The movie will be released Sept. 25 on disc, including two- and four-disc Blu-ray/DVD combos with Digital Copy.

Rasulo said Chapek has transitioned the consumer products division from trying to see what movie franchises will help sell house wares to managing a franchise through myriad product categories. The CFO said the question Chapek answered is, “How do I maximize the value of this franchise through the company while exploiting all this different categories that exist?”

Rasulo, when asked if the studio was still trying to assimilate the Marvel brand into its global marketing and retail network, said retailers apparently were overly cautious ordering Avengers products for the fourth quarter after less-than seller results selling Iron Man 2-themed products a year ago. The CFO said retailers have been told Disney is putting all its bets on The Avengers.

“This is where you’re going to see for the first time in its full glory what Disney can bring to Marvel,” Rasulo said, adding that retailers now are hoping to “catch up” with expected consumer demand for Avengers products by Christmas. “I wouldn’t call that growing pains with our organization."

Separately, Rasulo said it still remains to be seen whether Aereo-TV will be permitted to operate when the Second Court of Appeals in New York issues its ruling later this month. The New York-based service broadcasts live network programming via micro digital antenna to subribers on portable devices — notably tablets. Disney and other media companies have sued the service alleging violation of copyrights and other charges.

"Obviously, there is an appeal before which we will make our case," Rasulo said. "We don’t believe the Cablevision decision anticipated this kind of service. We are very confident with our position."