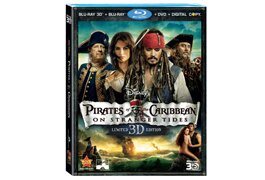 In a first for a major box office blockbuster, Walt Disney Studios Home Entertainment has chosen to delay a DVD-only release when it streets Pirates of the Caribbean: On Stranger Tides on Oct. 18.

A DVD-only release will street Nov. 15, a Disney representative said.

Both Sony Pictures Home Entertainment and Lionsgate previously have released a title as a Blu-ray combo pack with DVD, with no DVD-only release, but none of those releases grossed $1 billion-plus worldwide.

DEG: The Digital Entertainment Group estimates that as of the end of the first quarter of the year, there are nearly 30 million households in the United States with a Blu-ray player.