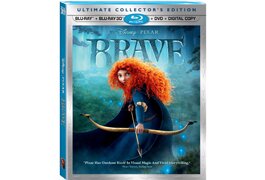 With Brave, Pixar jumps into a realm of princesses and fairy tales more suited to the likes of its corporate cousins at Disney. In fact, Brave almost feels like a conventional Disney animated film, but without the songs.

In telling a heartwarming story of a headstrong mother and her rebellious daughter, it’s also aimed more at young girls than any previous Pixar film, and it’s likely to score a bullseye with its target audience. For everyone else, Brave fits comfortably into the second tier of the Pixar canon: not a classic, but solid.

Merida (voiced by Kelly Macdonald of “Boardwalk Empire”) is a princess of Scotland who yearns for adventure. But when her mother, Queen Elinor (Emma Thompson), invites the sons of the Highland clan lords to compete for Merida’s hand in marriage, Merida pushes back, entering the contest herself to win her freedom. When Elinor rejects such disregard for tradition, Merida runs away and discovers a witch living in a cottage in the woods. The witch gives Merida a potion that could change her destiny, but it has unintended side effects that could have dire consequences for her mother, causing the pair to come together to work out their differences.

Disney enthusiasts will recognize many of these elements, and comparisons to Brother Bear will be hardest to shake.

Still, Brave is expertly animated, which is hardly a surprise coming from Pixar. From the vastness of the Scottish landscapes to the fine detail on the cloth of the tartans and tapestries, the film bristles with a texture that is easy to enjoy. The 3D effect is not overwhelming, and at times seems barely there. And you better believe the film gets full comedic mileage out of the pompous buffoonery of the Scottish lords (be sure to fast-forward to the end of the credits).

Blu-ray extras are plentiful, starting with the underwhelming The Legend of Mordu short film, which basically re-tells a story that’s told in the film, but with more details and in a different animation style.

Much better is the lyrical La Luna, about three generations of janitors tasked with maintaining the phases of the moon. But that’s an overly technical description of it. La Luna is a visual delight in every frame.

A commentary with some of the filmmakers discusses primarily the evolution of the story, and several featurettes detail the creation of the film, especially the animation process, including all the challenges of rendering Merida’s wild red hair. The disc also includes an alternate opening and several deleted sequences, most of which are minor snippets trimmed for length and pacing.