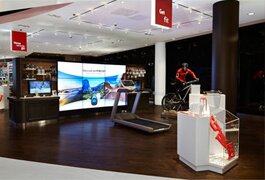 Verizon is also a partner with Redbox for the latter’s Redbox Instant hybrid disc-streaming service.

That’s a business model Dish Network envisioned for Blockbuster and its 1,500 domestic stores.

Dish chairman and founder Charlie Ergen, in a presentation earlier this year, said Blockbuster was never purchased to be run only as a movie-rental storefront. Instead, the brand was considered a suitable consumer draw for Dish to sell wireless products on its yet-to-be launched wireless network.

“The stores are just too big for video-only product,” Ergen said in February. “There’s a real asset there as long as we can tread water long enough to use them for wireless or other products.”

Instead, Dish was never able to get the required regulatory approval for its wireless spectrum, and subsequent efforts to acquire Sprint Nextel failed. So too, did the Blockbuster store, which Dish is shuttering by January.

Meanwhile, Verizon’s first “Destination” store opens Nov. 20 in the Mall of America in Bloomington, Minn. Another one is planned for Chicago. The telecommunications company will also redesign more than 1,700 existing retail stores throughout the country. Dubbed “Smart Stores,” the locations will showcase the same mobile lifestyle zones as the Verizon Destination Store, but on a smaller scale.