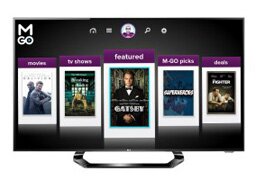 M-Go, the transactional video-on-demand entertainment service backed by Technicolor and DreamWorks Animation, Nov. 5 said U.S. owners of LG Smart TVs are now able to access M-Go's library of new-release and catalog movies and TV shows that can be streamed directly into their living rooms.

M-Go new releases include We're the Millers, Grown Ups 2, The Heat, Monsters University and White House Down, among others. Titles can be rented (from $4.99) or purchased (from $10.99).

Current LG Smart TV users can try out M-Go with a special offer of two free rentals of standard- or high-definition movies by typing in the code "LGTV" and hitting apply at the point of purchase. The promotion, which requires an M-Go account, is valid through Dec. 31.

M-Go’s partnership with LG was first announced in September.

"Consumers want new home entertainment experiences and easy access the entertainment that matters most to them," said James Fishler, SVP of marketing with LG Electronics USA. "M-Go combines an open platform with a user-friendly interface that seamlessly integrates with the LG Smart TV platform."

In addition to a "digital directory," M-Go offers up to six profiles per account and has a "watch list" feature (similar to Netflix) so that each member of the household gets tailored recommendations and his or her own list of movies and TV shows to watch later.

“By working with LG, we're proud to remove obstacles to finding the best entertainment, helping consumers get one step closer to enjoying their entertainment on their big screens at home,” M-Go CEO John Batter said in a statement.