Harris Poll: 53% of Americans Have Streamed a TV Show 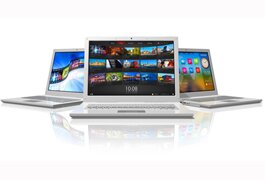 More than half of the country’s television viewers have streamed a program over the Internet via a connected device, according to new data from The Harris Poll.

More than half of Americans (53%) said they have watched digitally streamed TV programming on a connected device, while among 18- to 35-year-olds streaming is nearly as popular (41%) as viewing a live broadcast (44%).

The Harris Poll of 2,343 adults surveyed online occurred between Oct. 10 and Oct. 15 by Harris Interactive.

The results underscore changing viewing habits in U.S. households, especially among younger viewers eager to time-shift programming due to increased access to connected devices such as laptops, tablets and smart phones. Among older viewers, the digital video recorder, on-demand options offered by cable and satellite TV operators, and rise in subscription video-on-demand and ad-supported VOD services has altered the traditional primetime viewing schedule.

While streaming may not supplant traditional TV viewership, it is by no means an afterthought. More than 30% of respondents said they have the ability to watch streamed programming on their TV, compared to 19% via set-top boxes or video game systems and 17% via Internet-compatible TV sets.

Another 20% cited streaming on any device as their preferred method of watching TV programs. Another 20% of respondents said they are watching more online/streaming TV content now than a year ago and that that they expect to be watching more a year from now.

Among those not watching more streaming content compared to a year ago, 59% indicated factors such as limited free streaming options, a dearth of programming not already offered via broadcast, having to watch on a computer screen, insufficient bandwidth and ease of access for not watching TV programming over the Internet.

Notably, the vast majority (90%) of respondents still prefer watching the network broadcast of a TV program when possible.

Have Kids, Will Stream

More than 38% of respondents with kids had a TV with Internet access, either directly or via a box or game system compared with 27% without children.

Regardless of how Americans watch TV programs, Harris found that 81% said they are doing other things while watching TV. Nearly 65% engage in online activities; 37% read a book, magazine or newspaper, while 11% read a book on an electronic reading device; 35% text and 25% do other things.

“This adds challenges to digital media planners and ad agencies needing to capture and engage audiences,” said Rhona Wulf, VP interactive media practices with Harris Interactive. “With the 35-and-under age group showing particularly strong streaming and multi-screening, along with those in households with children, those looking to speak to these markets are under particular pressure to establish multi-platform approaches.”