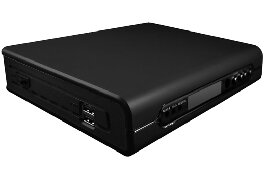 MARINA DEL REY, Calif. — You know all those set-tops taking up room in your entertainment center? Most of them will be gone within five years, according to one panelist May 4 at day two of the Digital Hollywood conference at the Ritz Carlton.

“What I think is the set-top as we know it, in my opinion, is going to disappear,” said Jan Steenkamp, the VP of Americas and a founding
member of Irdeto, a software security and media company, May 4 at Digital Hollywood. “The set-top box will become software. The biggest cost to do business is set-top boxes.”

Nearly 75 million U.S. households will have a connected TV by 2015, according to Parks Associates research, and content, games and everything else we need a set-top for nowadays will come directly into those connected HDTVs, Steenkamp said.

Kurt Hoppe, director of smart innovations and alliances for LG Electronics, was hesitant to agree, but did concede that “economically, cloud-based [content], long-term, is an attractive solution.” He suggested a hybrid set-top, cloud-based approach would be the future of the entertainment center.

Jeffrey Binder, general partner of Genovation Capital, also took the middle road, predicting: “What we might see is centralization of that [set-top] device,” with one box taking care of all needs, he said.

“As things move more toward cloud-based, stream-based delivery,” there might be less need for set-tops, according to Jay Endsley, principal engineer and director for Samsung Electronics.

Whatever the future of set-tops, one thing is key, according to Brian Miller, director of business development for branded products for Western Digital: “You need to take it from the consumer perspective. They want to be able to access all their content. Period.”

And, at least for now, the best quality content isn’t in the cloud, he said.

“In the end, for all your personal content, they want a copy in the house,” Miller continued. “The reality is, if the content is in your house, it’s always the best [quality]. If you try to stream 1080p from the cloud, good luck.”

Travis Parsons, VP of corporate development for Sezmi, said that chances are good that five years from now the set-top industry will look vastly different than it does today, but in order for entertainment centers to be completely reliant on cloud-based solutions, the infrastructure needs to be there to support it, and that’s just not reality today, he said.

“What’s probably going to drive this is the consumer experience, and I think you’ll see it happen overseas, before you see it in the U.S.,” Parsons said.