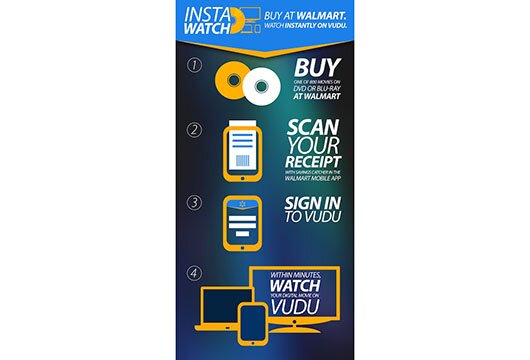 Walmart has launched a beta-test platform designed to simplify the process for consumers to get access to digital versions of packaged-media purchases.

Dubbed “InstaWatch,” the platform enables a consumer of a DVD or Blu-ray Disc movie purchased at Walmart to scan the store receipt through a special "SavingsCatcher" app on a mobile phone to access (or watch) the digital file on Vudu.com.

While much of the industry is increasingly focused on electronic sellthrough and transactional VOD, Walmart is attempting to meld both physical and digital distribution through InstaWatch.

“For movie lovers, one of the biggest challenges can be finding a way to watch your favorite titles on all your devices — from the DVD or Blu-ray in your living room to your tablet on the train,” Gibu Thomas, SVP of mobile and digital for Walmart Global eCommerce, wrote in an Oct. 15 blog post.

Walmart is no stranger to pushing the envelope in home entertainment distribution. The world’s largest retailer is the biggest retailer of packaged media and in 2012 launched the first disc-to-digital platform in the world in association with major studios.

As owner/operator of Vudu.com, Walmart has been a pioneer in pushing rollout of cloud-based digital rights locker UltraViolet, including early digital access to new-release movies.

“While we’ve sold digital copies with DVDs and Blu-rays for years, we heard that very few customers redeemed their digital movies,” Thomas wrote.

InstaWatch directs consumers to Vudu, the transactional VOD and electronic sellthrough platform Walmart acquired in 2010. The retail behemoth hopes InstaWatch will encourage consumers to not only visit Vudu, but also spend more time on the site.

“We’ve been working to integrate physical and digital movie collections for our customers. This is the next step, and the right direction as we work to increase the value of movie purchases,” Thomas wrote. “The ease of how InstaWatch works is what I’m most excited about.”

'Wings' and a 'Walker' at Walmart