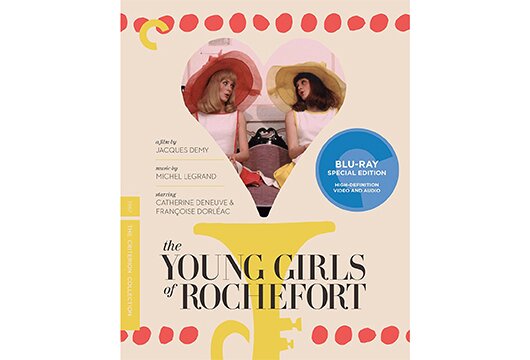 Spirited and sumptuous, yet with an overriding sense of melancholy due in great part to the real-life tragedy that still follows it around, Jacques Demy’s The Young Girls of Rochefort offers fairly persuasive gut evidence that it (as opposed to the prime MGM Hollywood musicals) must have been the primary influence on La La Land. Both Damien Chazelle’s not quite Best Picture Oscar-winner and this 1967 Demy follow-up to 1964's The Umbrellas of Cherbourg (which, like its predecessor, was fairly close to a co-equal collaboration between the director and composer Michel Legrand) are tributes to photogenic coastal towns – so much so in Rochefort’s case that it’s now an official part of local history. And you watch both delicate Demy’s, in a way you don’t with the majority of the Arthur Freed MGM’s, with a nagging fear that the wheels might fall off before the wrap-up, no matter how staggering the color schemes. In neither case do they, though I much prefer Girls to La La.

The former, of course, has a direct MGM connection in its casting of Gene Kelly himself as one of the dancing male leads — albeit Kelly at a semi-creepily advanced 54 when the film was shot in summer 1966, though he was still in fantastic physical shape (as he would still be on a 1973 Frank Sinatra TV special). There was also fellow American George Chakiris (a bona fide Oscar winner for West Side Story and a deserving one in my view) — at a time when a brief big-screen revival of musicals must have provided him a respite from repeatedly having to ask himself, “What the hell was I doing in 633 Squadron?” Chakiris and Broadway dancer/occasional supporting screen presence Grover Dale play glorified carny folk who’ve at least seemed to scrape together the funds to bankroll an eye-filling array of solid-colored shirts that you can almost hear. Perennially “with the fair,” these two apparently live to repeatedly check out (in what seems like something of casting stretch) the town demoiselles while passing through Rochefort. Two of those with endless potential are a young music composer looking for a break (Francoise Dorleac) and her equally or even more striking twin (Catherine Deneuve) who teaches dance to youngsters.

The gimmick (which is too pejorative a word because Demy specifically fashioned this film for Cherbourg star Deneuve and her co-lead) is that the two really were sisters — Dorleac the senior by about a year-and-a-half. As was apparently true in real life, the two personalities were different enough to make the pairing interesting, though when they appear in matching red sex-bomb dresses to perform a number at the fair near the picture’s end, their tandem “yowza” comes off as perfectly synchronized. The sadness that hangs over the picture (over and above its underlying theme of unfulfilled love) has to do with Dorleac’s death in a horrible rental-car crash a little less than a year after the picture wrapped. Having appeared atop a couple of major-studio forgettables, in Truffaut’s The Soft Skin and Cul-de-Sac for Polanski, Girls was her penultimate film before shooting swan song Billion Dollar Brain for Ken Russell (this a great trivia question regarding the director of the third and final “Harry Palmer” spy film with Michael Caine). But by the time Warner Bros. picked up Girls in ’68 (when it had just become Warner-7 Arts for about two years), American audiences saw the film knowing that Dorleac had been killed.

Not that too many saw, in my neck of the Al Roker woods, what turned out to be an overall international hit — and certainly not in a year when my city’s Big Ten football powerhouse (which basically controlled the local GNP) would eventually win the national championship. Girls got what was supposed to be a week’s booking at my campus-based art-house, which more normally played (though it probably just seemed that way) Radley Metzger soft-core 40 weeks a year. But I remember that it got pulled two days early (making it a five-day wonder) for lack of business, though not before I got to see it a couple times. I was always more a fan of Girls than I was of Cherbourg (also just out from Criterion in a separate-release breakout from its 2014 Demy box set) — though at least some of this may have had to do with the crackpot circumstances in which I saw the earlier film, which produced the pop standard “I Will Wait for You.” The movie’s U.S. distributor apparently had a product shortage because when the time came to fashion a double bill for second-run houses, the best anyone involved could come up with (and this was apparently a national pairing) was Sidney Lumet’s Superman of depressants, The Pawnbroker. A word to the wise: if you somehow ever see this double bill (not likely) because you want to get your date “in the mood” post-Cherbourg, make sure the pairing is in the right order.

Meanwhile, Girls’ supporting cast includes an actor of great charm in a role of great charm: Michel Piccoli, who had also recently starred with Deneuve in Luis Bunuel’s Belle de Jour — which, by accident or design but with a personally mind-melting result either way at the time, opened in the U.S. within a week of the Rochefort confection. Piccoli plays a modest music storeowner who years ago lost (and then lost track of) the love of his life because his character name is Simone Dame, and the poor thing — who still also laments what happened — didn’t want to be known as “Madame Dame.” The role goes to Danielle Darrieux, an actress who just turned 100 in real life — inspired casting because she does her own singing here and looks as if she really could be the twins’ most attractive mother, which, yes, her character is. Rounding it all out is an AWOL-happy sailor with artistic aspirations (Jacques Perrin, later of Z and Cinema Paradiso) — one whose painting hobby has engendered an imaginary “woman of his dreams” portrait, who turns out to be (and here, you have a lot of company, buddy) a replicate of Deneuve.

In his accompanying Criterion essay, critic Jonathan Rosenbaum spends a lot of time analyzing why Pauline Kael didn’t like the picture, and the movie’s rhythms indeed can be a challenge (though with the passage of time, not so much). It’s an odd mix of cotton candy and occasional real life (including an on-the-loose killer) and of musical stars and performers who aren’t; what’s more, singing/dancing principals sometimes interact with others in the same Franscope frame with others who aren’t, while a lot of the dialogue (a la Cherbourg) is sung. And while it’s great to see Kelly in a musical again (Warner-7 Arts would also release Fred Astaire’s Finian’s Rainbow comeback just a few month later to still underrated effect), he does have that alarmingly pasted-on grin and yet another of those dancing scenes with kids that led to not a few Kelly detractors. Yet sibling lightning, the supporting casting, electric color and Legrand’s score have worn well with the years — while the key concern at the time of my 21-year-old mind (“does Demy really know what he’s doing?”) is definitely answered in the affirmative by the Criterion extras.

A nice chunk of these are from black-and-white location material shot at the time, which means you a) get to see a cameraman puffing on a cigarette while Dorleac pours out her soul right next to him lip-synching a tune; and b) Deneuve throwing a real live snit-fit over a dress that doesn’t fit right (it was a hot summer when Demy shot what was kind of a French cinema budget-buster, which couldn’t have helped). Longtime Demy costumer Jacqueline Moreau talks of her collaborations (with spouse) sans mention of the dress, and filmmaker/Demy widow Agnes Varda contributes a wonderful 66-minute documentary that reunited many of the cast and crew for a 25th anniversary Rochefort gala to celebrate what had already long been a matter of civic pride. It’s tough to remain unmoved when the community unveils a memorial to Dorleac in Girls’ plot-central town square — this as her almost illegally elegant sister looks on as composed as anyone could be, at least to the eye.

New on Disc: 'The Young Girls of Rochefort' and more …