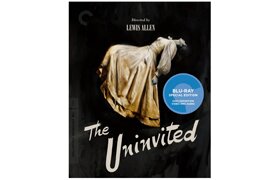 My old NYU film prof William K. Everson opined in class that this uncommonly lush romantic creeper directed by underrated Lewis Allen was the best ghost movie of all time, and nothing emerging on screen during the past (cough) four decades has diminished a movie that Criterion was super-savvy to pluck from the Universal-owned library of 1929-49 Paramount titles that it acquired in a steal via a deal with MCA in the 1960s. Who were the minds (on both sides) that brokered that plunder, anyway?

There are ghost movies, and there are ghost movies, but I’m pretty certain that no other example has engendered a musical standard, this one a product of the great Victor Young title theme that became “Stella by Starlight” once lyrics were added two years after the film’s release — it a subsequent staple recorded by many, jazz artists especially, and represented on my personal iPod by Frank Sinatra and Miles Davis (no, not together, though that might have been interesting). Even Jerry Lewis was able to exploit the melody’s haunting qualities by using it as a back-drop for Stella Stevens in The Nutty Professor, but here it does the same for a haunting star: the tragic, alcohol-destroyed Gail Russell, seen here in her first major role opposite Ray Milland. This was a year before the actor landed his Oscar role in The Lost Weekend, but already, he was one of Paramount’s top leading men.

The twosome of the title are Milland’s struggling London music critic and, of all, people, a sister with whom he has an unusual but wholly above-board roomie arrangement (she’s played by Ruth Hussey, who projected so little sexual heat on screen that only seven years later, she got cast as the same Jerry Lewis’s mother in That’s My Boy). And beyond that, the script doesn’t take too long to pair up both parties with squeezes or the next thing to them: Hussey with a middle-aged doctor in the siblings’ newly adopted Cornish village and Milland with the granddaughter of an old gent played in typically crusty fashion by Donald Crisp, who’d won an Oscar three years earlier as the patriarch in John Ford’s How Green Was My Valley. It is Crisp who, on a dime, sells the newcomers a seaside dream home that turns out to be possessed, though he does give them a good price without actually spilling the beans about the house’s checkered history. Mentally disturbed spirits, if there can be such a thing, have nocturnal run of the place; their woes date back to when the parents of the granddaughter (now 20 and played by Russell) had a messy relationship with the father’s gypsy mistress — one that so drove Crisp’s daughter (and Russell’s mother) so literally over the edge that she died a young woman. Given how curmudgeonly Crisp can be over Milland’s rather chaste pursuit of Russell, you have to wonder what it was like having the former for a father-in-law and how dad might have been a more sympathetic character than memories of him are portrayed. But that would be another movie when the one at hand is in many ways a stunner.

This is studio-system filming a its most accomplished, with evocative sets, mostly good process photography, Young’s score, luscious Charles Lang lighting that helped get him an Oscar nomination here for cinematography, leads who work well together and a light touch that enables the movie to end on a cute joke without cheapening what proceeded. Charles Brackett signed on as associate producer for added class, possibly because he didn’t contribute to usual partner Billy Wilder’s 1944 Double Indemnity and may have had the extra time. This is a classy home release all around, including as it does two radio presentations of the story (both with Milland); an old interview with director Allen (of Desert Fury, Suddenly! and other personal favorites); plus superior liner notes by the wonderful “Self-Styled Siren” Farran Smith Nehme, whose writings have picked up a deservedly huge following in a relatively limited time. A half-hour visual essay by Michael Almereyda deals not only with he movie itself but the personal demons of Milland and Russell (who died at 36 surrounded by vodka bottles after having started to drink as early as this film over stage fright and fundamental aversion to the star-making mechanics of the day). It also reminds us that Milland did publish an autobiography many years ago — one Almereyda makes sound as if it be worth pursuing on a trip to Amazon.com.

New on Disc: 'The Uninvited' and more …