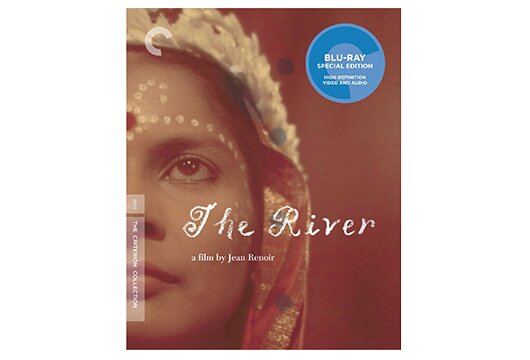 Novels by British but India-bred Rumer Godden helped spark two of history’s most fabulous color movies: Powell and Pressburger’s Black Narcissus (which she disliked) and this equally hypnotic independent production directed in English by Jean Renoir (which Godden did favor — though, yes, she did collaborate with Renoir on its screenplay). To the first point, Martin Scorsese has called The River and The Red Shoes (also from Powell and Pressburger) the two most beautiful color films ever made — and if Renoir’s film wasn’t some kind of influence on the director’s own Kundun, I’ll buy you a new hat, as my mother likes to say.

Set in what feels like a timeless era that has nothing directly to do with the postwar Gandhi-propelled political upheavals, this remembrance is certainly an alternative to Kipling in its treatment of race relations and choice of central characters. The latter are adolescent girls vulnerable to the same burgeoning sexuality that the Susannah York character experienced in 1961’s Loss of Innocence (aka Greengage Summer), a better-than-respectable movie also adapted from a Godden novel. One of these is Harriet (Patricia Walters), a Brit-blooded Bengal resident who also narrates, looking back from the perspective of years at a summer of her own. Harriet’s father manages a jute factory, her mother seems to have spent a lot of her life pregnant (all girls except for a solo male tyke), and one of her two closest peer acquaintances is half-caste Melanie (played by real-life dancer Radha, who in one standout scene shows us that indeed she was). The other friend is the financially well-off Valerie (Adrienne Corri), who comes closest to being a sex-bomb of the story’s bountiful redheaded characters (a plot point that doesn’t go without mention). In a bizarre or at least ironic footnote to film history (at least in contrast to this hugely life-affirming project), Corri would play the rape victim in A Clockwork Orange 20 years later.

The narrative flows episodically (kind of like a river) but mostly deals with the girls’ flustered behavior over the appearance of a physically and psychologically wounded war veteran whose visit shakes up their existence — though Melanie displays so much outward poise that she’s less easy to read. For budgetary reasons, Renoir had to go with a couple non-actors in key roles, and it sometimes shows — though if you know that Thomas E. Breen (as the vet) really did lose a leg in the war, it adds to the story’s power. Otherwise, the natural beauty carries the drama to a degree it has in only a few other movies, and on no other level do you ever sense that production money was an object.

A lot of the bonus extras (mostly carried over from the old Criterion DVD) deal with Renoir’s good fortune in finding a financial angel: Kenneth McEldowney, who was a successful L.A. florist. You hear a lot of horror stories from history about hapless novices who fancied themselves film producers, but in this case, McEldowney shared Renoir’s enthusiasm for the Godden novel and Indian culture in general. Though their relationship had plenty of the expected tension between an artist who took his time and a money-man who kept everyone in suspense over his ability to pay the escalating bills, McEldowney was a key component in the success of what was Renoir’s first color undertaking, as well the film its director ranked as the favored experience of his long career. Given Renoir’s gene pool, the extent to which he took to color hardly surprises, and as a footnote, the Gaumont restoration of the director’s subsequent French Cancan has led to another of the most gorgeous Blu-rays ever (both in French and British Region B releases).

In the mid-1970s, I was lucky enough to see The River projected on the big screen — fully expecting that it would be a 16mm print given the difficulty just about anybody had at the time of securing 35mm copies of most United Artists releases from the early 1950s. As it turned out, the programmer had befriended McEldowney, who lent his personal Technicolor copy, which enabled me and my fellow audience members to be as transfixed as Martin Scorsese says he was at age nine in ’51, an episode he enthusiastically recalls in one of the Criterion extras. Other supplements here include Ian Christie notes, a new video essay by filmmaker Paul Ryan, an audio interview with McEldowney (who died in 2004); and a 2008 documentary on the movie’s making, which runs an hour. It includes interview snippets with the late Satyajit Ray, who was employed in minor capacity on The River, giving him an entrance to the industry and justifying, just by itself, the entire production, as far as I’m concerned.

In other words, the hell with “Star Wars” coming back; the best screen news of the past many months is the recent restoration of Ray’s Apu trilogy — which, if you love The River (or, in fact, cinema itself), you have to love as well.