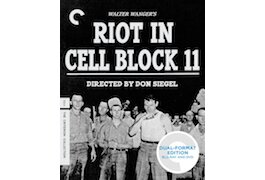 The backstory to this example of what used to be called a “shaky-A” is probably a little more interesting than the film itself, though there was nothing shaky about this onetime sleeper’s profit statements on a low production budget. Indeed, it played drive-ins for years and put distributor Allied Artists (reconstituted from Monogram Pictures, home of the Bowery Boys) on a much higher plane in terms of respectability and financial booty than its other releases up to that time, which were not exactly “ripped from today’s headlines” the way this one was.

But the backstory has to do with producer Walter Wanger of (just to name two landmark films) Stagecoach and the Liz-&-Dick Cleopatra, who in 1951 shot agent Jennings Lang in an adultery-engendered squabble involving Wanger’s wife Joan Bennett and served four months on a kind of honor farm. There must have been extenuating circumstances; there definitely was a great lawyer (attorney to sinning stars Jerry Geisler).

Because of his experience, Wanger wanted to do an exposé of prison abuses, starting with overcrowding. So he cut a deal with Allied Artists and director Don Siegel to film a Richard Collins script that Wanger had in his hands about this very subject, inspired by a real-life 1952 riot in Michigan. Collins himself had been a victim of the Blacklist — this is what having penned the script of MGM’s notorious Song of Russia years earlier got you in those days — so the production obviously boasted an interesting array of personnel even before it came to the cast. As it turned out, lead Neville Brand (who later played Al Capone in the excellent TV pilot for “The Untouchables”) had been one of the most decorated soldiers in World War II, and fellow combat veteran Leo Gordon had served five years in San Quentin for a barroom scrape early in his life. One of the assistant directors (his first screen assignment, in fact) was Sam Peckinpah — whose family heritage of esteemed judges was apparently crucial in securing permission to film in Folsom Prison. Unless the tight shooting schedule worked against this, there must have been interesting yak-fests in the commissary, assuming Allied Artists even had a commissary.

The result is a kind of liberal polemic (though its advocacy for reform certainly makes sense) with opportunities for the get-tough reactionaries in the state house to have their own says as well — something a little easier for them to do when the cons here are heaving just about everything in their cells out into the foyer. One of the best performances in a lineup of familiar non-star faces (Whit Bissell, anyone?) is Emile Meyer as the sympathetically progressive warden — this despite the fact that the actor usually played heavies and had just been seen in his most famous role: the villain-with-his-reasons in Shane. Meyer is usually seen either mixing it up with a statehouse flunky played by Frank Faylen or in the prison yard trying to negotiate with Brand, who has a lot on his mind including keeping Gordon in line (the latter is not the most stable guy in the block).

Brutal for its day, Riot runs a tight 80 minutes (if only more movies did) and occasionally reflects a low budget that doesn’t give the great cinematographer Russell Harlan that much to do, though his deep-focus shots of the darkened prison corridor are not unimpressive. I have a fondness for a couple of the early Siegel films (especially his feature debut The Big Steal), though it would be misleading to attempt making a case that the breakthrough movie for the future director of Dirty Harry was anything other than the movie that rejuvenated the career of Wanger as well. In fact, the Wanger-Siegel teaming worked out so well that they followed up with Invasion of the Body Snatchers — not as big as Riot in their day but a movie now regarded as an all-timer. Wanger, sans Siegel, then made yet another prison picture, I Want To Live! — based on a real story and derided by some as a factual crock but also the source of oft-nominated Susan Hayward’s Oscar performance.

The usual neat array of Criterion extras includes Siegel’s son with actress Viveca Lindfors (actor and voice-over specialist Kristoffer Tabori) reading relevant passages from his late father’s autobiography A Siegel Film — a book I own and need to get around to reading. And just to show you that it wasn’t that easy for Allied Artists to get the Bowery Boys off its back, one of my downtown movie palaces (called the Palace) paired Riot in early ’54 with the Leo Gorcey/Huntz Hall gang’s Paris Playboys for what must have been a raucous afternoon or evening of raucous entertainment.