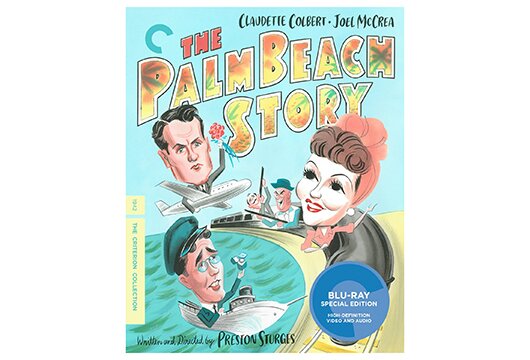 An uncommonly knockabout farce even by Preston Sturges standards — yet also visually lush enough for its lead actress to be expertly sporting duds by Irene — The Palm Beach Story was released smack in the middle of the writer-director’s prime years. Which, as almost every real film person knows, lasted only half-a-decade before his fallout with home studio Paramount (depending on whether you think 1948’s Unfaithfully Yours at Fox was a brief comeback oasis amid his precipitous downslide). In fact, writer and historian James Harvey — whose highly regarded Romantic Comedy I now have to read after seeing his beguiling appearance on a Criterion extra here — notes that even this very movie failed to hit commercially at a time when the immediately preceding Sullivan’s Travels had underperformed as well at the box office (though The Lady Eve, just before that, had been a hit).

Story opens with sheer frenzy amid some initially puzzling farce involving a wedding whose particulars aren’t fully ironed out until the movie’s final scene (if, indeed, they are, at least in full). Once this early dust clears, it’s apparent that the by now long married Claudette Colbert and Joel McCrea are struggling to pay creditors despite their Park Street address and that Colbert regards herself as jinx to her struggling husband’s efforts to make it as some kind of city-planner inventor. She runs off to obtain a quickie Palm Beach divorce (a beach easily trumps the alternative, Reno) and hooks up with a pair of filthy-rich siblings (Rudy Vallee, Mary Astor). But not before Sturges temporarily jettisons what up to now has been the storyline so that Colbert, in an extended sidebar, can encounter a band of gun nuts and boozers who have their own club car on a train bound from New York to Florida (many played by members of the filmmaker’s familiar-faced stock comedy). Beware of William Demarest, especially when he has a pocketful of ammo.

I seem to recall some long-ago Colbert interview where she recalled her initial horror that crooner Vallee (then, a la Dick Powell, on a career downswing) was cast as an unthreatening ga-zillionaire I’ve always thought might have been an inspiration for the character Joe E. Brown would later play in Some Like It Hot. Sturges was obviously onto something, and Vallee parlayed his casting into a successful second career, including a beaut of a pompous comic turn as Cary Grant’s love rival in The Bachelor and the Bobby-Soxer. In a way, Vallee’s pompous here, too, but lovably so — and the scene where Colbert steps on his glasses twice climbing into the train’s sleeping berth is among the prime comic cuts of ’40s Hollywood. Also funny is sis Astor’s squeeze-of-the-week (played by Sig Arno), whose two main chores here are to take pratfalls and to carry a lot of luggage.

Story is the first Sturges to get a Blu-ray release in the U.S., though Sullivan’s Travels — which has already gone hi-def in Britain — will soon be getting a Criterion upgrade from the company’s previously released DVD version. A key bonus on the latter, which will be carried over to the Blu-ray, was the “American Masters” program devoted to Sturges’ equally astonishing success and burnout — which isn’t to say that author Harvey doesn’t offer a lot of valuable back-grounding here. Inevitably, this deals with the filmmaker’s odd upbringing by an artsy/flakey mother and pro-business stepfather of wildly differing temperaments and also the studio machinations that helped lead to the creative genius’s departure from Paramount (a bad move for both, though at least Paramount didn’t compound the debacle by then getting involved professionally with Howard Hughes as Sturges did).

Another savvy bonus on this release is the inclusion of “Saturday Night Live’s” Bill Hader — who, unlike some of the youth-movement personalities that Turner Classic Movies sometimes employs, knows his vintage material and can convey love and enthusiasm for it. Hader actually kind of “performs” his contribution here, and it’s infectious (while complementing Harvey’s own style). The other extras atop a luminous 4K restoration of pure Paramount “glisten” are a radio adaptation of the screenplay; a Sturges-written wartime short warning against loose lips and featuring future collaborator Eddie Bracken; and an essay by the Village Voice’s Stephanie Zacharek in which she notes that Colbert’s apple cheekbones “arrive on the scene a fraction before the rest of her does.” Exactly.

New on Disc: 'The Palm Beach Story' and more …