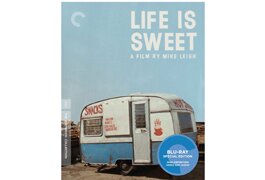 Given the sometimes zigzag-y distribution patterns for a fair share of screen exports to this country, I can’t recall if this National Society of Film Critics year’s-best winner or 1988’s High Hopes was the first Mike Leigh movie I ever saw, but Life Is Sweet was definitely the first to make a significant impression on me, which is what the writer-director’s breakthrough did to the international film community as well. With superbly well-rounded characters, on-point ensemble acting and old-style Left-ie compassion for the kind of folks who (20 years later) wouldn’t exactly be turning out in droves to see Margaret Thatcher curtsied to on screen by Meryl Streep, these Leigh trademarks were the ones Life set in motion for, comparably speaking, more of a mass audience than before. Though, truth to tell, Leigh had been slogging away in this basic milieu for years. Proof of this is in the supplements of this Criterion release, which I can almost swear gives Life a more vivid color palate than what I saw in theaters more than two decades ago.

Future Oscar winner Jim Broadbent (much thinner than we’re used to seeing) and the year’s National Society best actress winner Alison Steadman (married in real life to Leigh at the time) play a financially humble couple in the north-of-London suburbs whose struggles include a get-rich-slowly scheme involving the sale of food out of a trailer. Amid an enterprise more carefully thought out than the standard Ralph Kramden folly but still a bit dicey, Steadman rolls her eyes some but mostly goes with the flow, agreeing that if all is otherwise lost, the vehicle will still serve as holiday transportation.

Both parents find themselves involved in food service on various levels, with Broadbent’s day job in the kitchen of what appears to be a fairly posh establishment, working for someone not himself. As for their redheaded twins who aren’t identical but recognizable as sisters despite their contrasts in hairstyling, the more agreeable of the two (an androgynous-looking Claire Skinner) is learning the plumbing trade. The other (Jane Horrocks) is something of a lay-about, which means she spends her hours spouting political platitudes at the drop of a hat (sexual-political included) but not doing in anything constructive to advance her half-baked agendas. She also has an eating disorder and enjoys spreading chocolate on herself during sex (not in and of itself an additional eating disorder, I suppose, but perhaps in the same family).

Horrocks, who took the National Society’s supporting actress citation (that’s three) plus other year-end awards, gives such a shrill performance that I found parts of the movie tempting to resist in 1991 and still do a little. But it is a unique characterization, also an honest one — and, in the end, unforgettable. Acting-wise, part of the fun here — in fact, it’s a whole new experience in 2013 — is seeing actors we know so much better than we did then. These include Leigh regulars Broadbent, Timothy Spall, David Thewlis and, in terms of Leigh, a surprise ringer: Stephen Rea, shortly before The Crying Game became one of its year’s movie sensations.

The Criterion supplements include an essay by critic David Sterritt (an especially stimulating writer when talking about character-motivated films); a newly recorded Leigh commentary; a 1991 Leigh interview; and five short films (just five minutes each) that were essentially rejected pilots for a proposed BBC series of many, many more bite-sized projects that he hoped would end up becoming a complete story told in a kind of mosaic form.

Mostly of academic interest, they are rough-edged and unglamorous, even by Leigh standards. By this token, I can still remember how bowled over I was about sheer the opulence of 1999’s Topsy-Turvy (one of my favorite movies of all time) — astounded, in fact – because it was such a departure. Leigh is currently shooting Turner with Spall — a biopic of 19th-century Brit landscape painter J.M.W. Turner that is said to be the most ambitious film of his career and set for a Sony Classics release next year. More ambitious than Topsy-Turvy? Life is sweet, indeed.