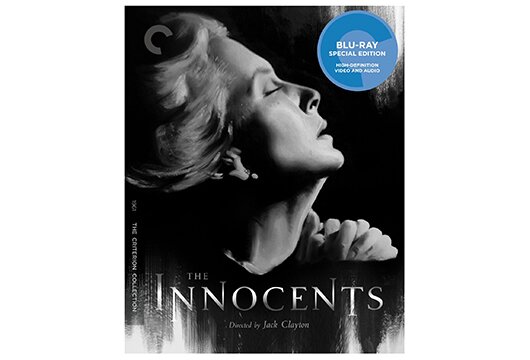 The bonus supplement for this critical late-bloomer make it clear that Truman Capote was the driving force behind the screenplay, even though he’s second-billed to William Archibald, who had earlier fashioned a play from the same august source: Henry James’s The Turn of the Screw.

Notable for its weird children and weird visual concepts (a beetle crawls out of a statue’s mouth, in full Bunuel-ian style), the entire endeavor feels a lot closer to the Capote wheelhouse than Blake Edwards’ beloved version of the author’s Breakfast at Tiffany’s — which came out the same year, and unlike The Innocents, earned an Oscar nomination for its lead actress.

Directed by Jack Clayton and a high point in his notably spotty career, this is a mighty psychosexual piece of work to have carried the 20th Century-Fox banner in 1961. And, for that matter, a mighty unusual film for Fox to have opened, at least in New York, on Christmas Day (Thanksgiving 1961 had been more down to earth with the nationwide expansion of The Comancheros). Clayton, then sporting some clout on the heels of Room at the Top, had long harbored a desire to film the James novella after having read it as a child. The studio agreed to advance a not insignificant budget for what was predominantly an arthouse picture, though its standard post-1953 demand that Fox titles be shot in CinemaScope forced Clayton and cinematographer Freddie Francis to visually re-imagine their treatment after they’d conceived it bearing a less expansive aspect ratio. Though there’s no allusion to an almost immediate predecessor anywhere in the Criterion extras, I’ve always wondered how the success of the 1959 NBC version of Turn with Ingrid Bergman affected the green-light Clayton & Co. got. The latter, by the way, seems to have gone off the radar; it’s never offered even by the online underground of marketers who specialize in old TV.

It is said on one of the accompanying Criterion interviews that (Academy snub or not) Kerr regarded her role here as the naïve-for-her-age governess as the high point of her career, and she carries most of a tough assignment — this qualifying “most” bowing to the contribution of Pamela Franklin (who had never before acted) and Martin Stephens, who absolutely could not be better as the children Kerr is hired to look after in one of those “Downton Abbey” type of domiciles where you’d have to hire an entire army regiment to handle the dusting. Capable as well is Megs Jenkins as a housekeeper, whose tongue must be pried open some to reveal the twisted earlier relationship between Kerr’s predecessor and a male employee on the estate that either by coincidence or cause-and-effect ended with the deaths of both. Even more zip-lipped about all this unsavory history is the children’s uncle (Michael Redgrave, who has one scene at the beginning). File it under “things that don’t come out in the job interview.”

Kerr starts seeing ghosts of the deceased, or does she? Both youngsters — but especially the male child — seem possessed by them as well, or are they? And why has the latter been sent home from boarding school, an event his older sister seems to (creepily) predict? And speaking of creepy, why does some kissing between the boy and Kerr seem so disturbing, as well as something completely out of the realm of a major studio release from around the same time as The Comancheros? Clayton, Francis, Kerr and the script play up the ambiguity all the way — such as having Kerr react to seeing a ghost a second or so before the audience gets its own view. Contributing to our disorientation are what must have been some of the most complex optical effects of their day: a lot of dissolves and fades and superimpositions filling that 2.35:1 dimension.

The extras here are juicy: an essay by critic Maitland McDonagh that’s heavy on the psychological themes plus lots with cultural historian Christopher Frayling (both a substantial on-screen intro, then voiceover commentary) that’s both substantial and accessible about a production where everything came together. A top cinematographer in his own right, John Bailey has become something of an unofficial historian of his craft and talks on camera about the work here by Freddie Francis, who was just coming off his Oscar for Sons and Lovers, a movie whose Scope black-and-white merits a Criterion crack (a fairly recent Fox on-demand version of it doesn’t approach the bang-up B&W we get here).

The Innocents fell into a kind of marketing purgatory at the time: too refined and dignified for the Hammer horror crowd on the one hand — yet with relatively unwashed subject matter (Henry James or not) for the kind of people who were going to arthouse fare in the early ’60s. Only in the past decade or two has it gotten the acclaim it deserves, and this viewing makes me want to take my first look at 1967’s Our Mother’s House since it came out (the picture reunited Clayton with a more mature Franklin). This visually spectacular presentation also makes me curious to re-see 1972’s almost universally reviled The Nightcomers, which in kinkier terms imagined what might have transpired between the previous governess and her equally dead on-site lover, with Marlon Brando and sex-bomb Stephanie Beacham in the roles. This was at the tail end of Brando’s pre-Corleone has-been phase, and AVCO-Embassy kept Nightcomers on the shelf until about a month before The Godfather’s release so that it could capitalize on all the Brando buzz that was already spreading big-time.

New on Disc: 'The Innocents' and more …