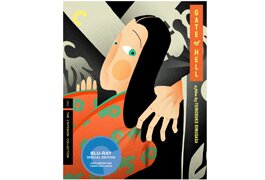 Until after World War II, albeit immediately so, it was only on occasion that even a British film could get the time of day from Oscar voters. But to see a foreign-language release win in a craft category even a couple decades after that was a true eye-opener, a term that further describes Kohei Sugiyama’s cinematography for this hallmark Japanese title, which the history books routinely mention along with Britain’s Michael Powell-Emeric Pressburger collaborations or Jean Renoir’s The River or Luchino Visconti’s Senso as one of the wave-makers in worldwide color cinematography of the ’40s and ’50s. Sugiyama’s work didn’t rate an Oscar nomination (which begs a question), but the costumes by Sanzo Wada did take the top award, and there’s no doubt that Sugiyama’s contribution helped make this possible.

A lively 12th-century rouser even without the lush pigments, Hell also took the foreign-language Oscar, its New York Film Critics Circle counterpart, plus the Grand Prix at Cannes for director Teinosuke Kinugasa. Set against a foiled palace coup against the reigning lord, this tight 89-minute epic deals with a cheeky-in-both-senses samurai (Kazuo Hasegawa) who really pushes it when the surviving ruler asks him what kind of official thank-you he’d like for having even broken with his own brother to support the established order. “Well, since you’ve asked,” the latter basically responds, that lady-in-waiting who aided in the resistance would be a nice reward. Yet, it turns out that she’s already wed to a regime-favored samurai (Isao Yamagata) of warm and steady demeanor. Such stickiness makes the proposition a skeptical one to the lord, but there’s also evidence here that he has a perverse sense of humor that’s willing to toy a little with his underlings; thus, he’s willing to give it tentative support. Confused and possibly a tad flattered by all this, the wife (Machiko Kyo) remains faithful, though we sense almost instantly that that no good can come of this situation.

I have vague memories that the first time I saw Kinugasa’s best known film — sometimes in the ’60s — its Eastman color had not yet begun or at least concluded its decline into then inevitable fading, making the print an acceptable rendering of this historical achievement. After this, forget it: I could never score a viewable copy during my 8-year tenure as programmer for the AFI Theater, and for years, every faded airing on Turner Classic Movies has resulted in enamel-imperiling gnashing of my teeth. Film historian Stephen Prince’s accompanying Criterion essay gives an excellent overview not just of the story’s historical context but also the near annihilation of Hell’s physical appearance. This restoration, given 2K treatment, is the real deal — almost too much to hope for given that just a couple months ago, Criterion also helped made available the newly refurbished Powell-Pressburger The Life and Death of Colonel Blimp, a movie of equal stature in the color hall of fame (though with the young Deborah Kerr’s red hair as a mere starting point for visual components, this is probably not fighting fair). Hardly a matinee idol, Hell’s Hasegawa has the fleshy face of a character actor as opposed to a conventional lead, which possibly makes the pursuing samurai’s lust come off as a little more desperate. Actress Kyo, a huge star at home, had previously starred in Rashomon and Ugetsu and would soon work both sides of the Pacific in a single year. That would be 1956, when she headlined director Kenji Mizoguchi’s final work (Street of Shame) and then played it straight against the broad farcical frolics of Marlon Brando and Glenn Ford (a study in acting contrasts there) in MGM’s screen version of the Broadway hit The Teahouse of the August Moon.

For the record, the Hollywood releases Hell beat for the costume Oscar were Brigadoon, Desiree, A Star Is Born and There’s No Business Like Show Business (which contains at least one white and tight Marilyn Monroe dress for the ages that barely contains her). Wada’s work definitely gets the edge in this pack, but in terms of the Hollywood home-front, I think the most dramatic use of costuming in 1954 was Joan Crawford’s changing apparel in Johnny Guitar: black, yellow and white.