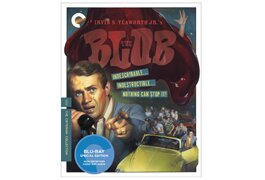 The arrival of Steve(n) McQueen’s frugally budgeted 1958 black sheep of a career-maker on a Criterion Blu-ray falls into the wonders-never-cease realm — but when the movie’s always surprisingly robust color values are additionally and unexpectedly rendered in 4K, it really is a new silicon-ish day (that’s what the title what’s-it was actually made of by the prop department) in home entertainment.

We’re only looking at an upgrade from the 2000 Criterion DVD, but I never expected the pigments to look this striking; the Blob itself ends up looking remarkably like the sickly shot a friend of mine recently posted on Facebook of her recently broken toe (this is a compliment). And the movie’s visuals prove striking from the very first scene, when The Blob (whose No. 33 Billboard title tune by then-novices Burt Bacharach and Mack David cracked the top 10 in the L.A. market) charts its course as one of the few creature features in history to open with a make-out scene shot in close-up. When the couple’s then unknown male turns around, and it’s Steve McQueen, we witness a star being born.

Carried over from the DVD, this Blu-ray edition has two excellent commentaries: one with producer Jack H. Harris and encyclopedic film historian Bruce Eder, the other with the late director Irvin S. Yeaworth Jr. and featured actor Robert Fields. Harris, who comes off as a super guy, notes that how much beneficial publicity the movie got from Steve Allen and other cut-ups poking fun at the title and concept when the picture was new in theaters (Allen apparently lampooned it multiple times on the air). Yet of the purely existential commentary provoked by the movie, the most profound was from my 3-year-old son (now in medical school) who, sitting next to me as we were watching it on TV in the late ’80s, asked, “Daddy, why is there a Blob in this movie?”

Shrewdly conceived as a hybrid combining the “thing” pic with the kind of juvenile delinquency drama that was huge at the time, this is, as critic/historian Danny Peary has pointed out, a rare movie of the day that pretty well took the side of acting-up teens. Though, this said, the acting-up here is pretty benign; you can imagine these high schoolers (many of whom, like McQueen, look 27 here) jamming 15-fold into a phone booth just a few years down the road. But in any event, the kids are definitely alright when they eventually rise to the occasion when it comes time to combat the marauding goo — which, in the story’s most emblematic scene, envelops a small-town cinema during a nocturnal showing (Eder notes that this had to be the first film to embrace the “midnight movie” concept). McQueen’s co-star is Aneta Corsaut (later of “The Andy Griffith Show”), but many of the minor performers were plucked from The Blob’s rural Pennsylvania shooting location — which, as Eder always points out, was only about a half-hour away from where Bill Haley & the Comets grew up (speaking of j.d. or otherwise burgeoning counter-culture influences).

Paramount picked up this indie release, pairing it in some markets with I Married a Monster From Outer Space, which Harris mistakenly characterizes as a dog instead of a surprisingly eerie psychological drama (with an admittedly wretched title) that has come to acquire a following. Yet it’s true that in some markets, The Blob was commercially strong enough to play alone on the bill. McQueen always had conflicting sentiments about his first big-screen role of significance, but it did indirectly lead to him being cast in CBS’s “Wanted: Dead or Alive,” whereupon the rest was history. Teens also continued to be ripe for exploitation on screen, though in productions that were soon deep beneath McQueen’s asking price: Cave Man beat The Blob into theaters by maybe three months, but the following year would bring Teenagers Rrom Outer Space.