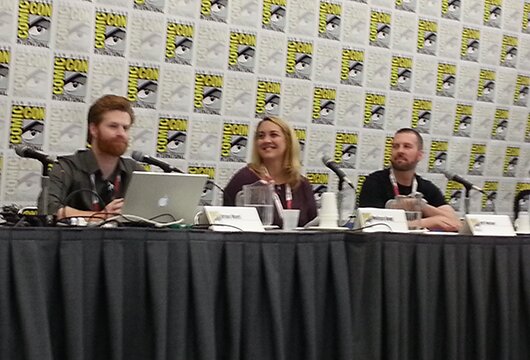 SAN DIEGO — At its annual panel held at the 2015 San Diego Comic-Con International, Shout! Factory announced a slew of cult favorites the studio is working to release on Blu-ray Disc and DVD.

While many of the studios are shifting focus toward digital releases, Shout! Factory has remained one of the few stalwarts of releasing cult titles on packaged media, aimed specifically at collectors.

Among the titles announced that drew a rousing response from the audience was the upcoming release of Death Becomes Her (1992). Jeff Nelson, senior marketing director of Scream Factory, said the release will feature the film in anamorphic widescreen for the first time.

“It’s a horror comedy that a lot of people have been asking for,” Nelson said during the July 10 panel.

Death Becomes Her is due in November, along with Troll (1986) and Blood and Lace (1971). Slasher film Blood and Lace will be seeing its first home video release ever. Troll will be packaged as a double feature with Troll 2 (1990), with the bonus materials focusing on the original Troll, Nelson said.

Other cult horror movies from the Scream Factory line coming out over the next 12 months include The Garbage Pail Kids Movie (1987), which is Shout’s first ‘PG’/family friendly horror release, according to Nelson, and Nightmares (1983), which will arrive on Blu-ray for the first time. These titles along with The Return of the Living Dead (1985) will be released as collector’s editions.

Scream Factory also has three brand new horror movies: Blood Sucking Bastards, which will be released on disc and digital after its theatrical release; The Editor, which comes out on DVD and Blu-ray Sept. 8; and Gravy, starring Paul Rodriguez, Gabourey Sidibe, Sarah Silverman and Michael Weston, among many others.

Shout is still keeping up with the industry’s digital evolution, and Scream Factory is running its Summer of Fear on Shout Factory TV, which streams cults movies and television shows.

Also from Shout! Kids is The Seventh Dwarf, which features the voices of Peyton List and Norm MacDonald, among others. Melissa Boag, VP of Shout! Factory Kids, said the studio will release the animated movie in theaters and home video in 3D.

“It’s one of the only 3D animated movies that I thought has excellent use of depth,” said Brian Ward, Shout! Factory BD/DVD producer. “The 3D is fantastic.”

“It’s hilarious and a little tear-inducing,” Ward said. “That one I’m really, really happy to do.”

Other feature films coming out are a movie made of Gail Simone’s Red Sonja comic book and The Image Revolution (2014), a documentary about the launch of Image Comics, which was founded by the superstars of Marvel Comics who left to create their own company after years of mistreatment.

Another cult favorite that Shout has just started working on is another complete series set of “Freaks and Geeks,” which will get the full Blu-ray treatment for a fall release.

“[This show is the] one that sort of put us on the map in the first place,” Ward said. “Our first Comic-Con appearance was bringing the cast and Paul in here. They did a panel where they screened the last episode and we had a big signing with the yearbook edition.”

“We don’t know what we’re going to do yet, we’re still very early in it, and it is a very comprehensive set. The mere idea that there could be something that we didn’t get to put on those TV sets… and yet we’ve got ideas. So there will be additional material. It’s just a question of what right now,” Ward said.