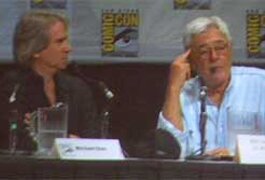 SAN DIEGO — Fans eager for a taste of Superman II: The Richard Donner Cut did not leave Comic-Con disappointed. At Warner Home Video's "Superman Through the Ages" panel Friday, July 21, fans were treated to not one, but two scenes from the new DVD edition, due Nov. 28.

But the biggest surprise may have occurred when the moderator announced, “Now the person who has been waiting for this film to come out longer than anyone else, director Richard Donner,” who walked onto the stage to a standing ovation.

The Donner cut was introduced at the conclusion of a montage of clips from the different incarnations of Superman over the years, set to John Williams' rousing theme music. The montage ended with an ad for the Christopher Reeve Superman Collection of the first four “Superman” films.

The first clip was the revised opening sequence of the film, reintegrating Marlon Brando into the picture and revisiting moments from the first film before ending with the title card “A Film by Richard Donner.”

In the 1978 original Superman, Lex Luthor reprograms two nuclear missiles, one of which Superman is able to divert into outer space. In Tom Mankiewicz's original script for the first two films, it is the explosion of this missile that frees three Kryptonian baddies from the Phantom Zone, not a terrorist bomb as seen in the theatrical version of Superman II.

In fact, the terrorist bomb sequence, in which Lois Lane becomes trapped under an elevator in the Eiffel Tower before Superman saves her, has been excised to allow for a more seamless integration between the plots of the two films.

In the second clip, Lois convinces herself Clark Kent is Superman by drawing glasses on a picture of Superman in the Daily Planet. She then confronts Clark, and when he denies it, tests her theory by jumping out the Daily Planet window.

Editor Michael Thau, who worked with Donner on many films, including the DVD director's cut of the original Superman, spearheaded the effort to restore what he said was the original vision of the movie, calling it a “milestone in cinematic history.”

“This is the first time a director will be able to realize his vision 30 years after it was taken away from him,” Thau said. “The new version will have about 80% Donner footage.”

The first two “Superman” films were being shot concurrently by Donner when production delays caused a rift between Donner and the producers, Alexander and Ilya Salkind. They had filmed 70% of the second film when the decision was made to focus on completing the first film. After it was released, Donner was replaced by Richard Lester.

“If the first one was a failure, they would have made me come back to finish the second one,” Donner said. “It was a success, so they fired me.”

“We shot a lot of footage they decided not to use, for whatever reason,” Donner said, although it may have had to do with Lester needing to re-shoot enough of the film to earn a director's credit.

Thau said he softened the comic touch Lester brought to the second picture to make it “more in tone with the first one.”

“Superman I and II were meant to tell two parts of the same story,” Thau said.

Restoring the original footage was not without its problems, since Donner was not able to film some sequences from the original script.

For one, in which Lois pulls a gun on Clark to prove he is Superman, Donner and Thau used a screen test of Margot Kidder with Reeve in which they performed the scene.

“In one shot Chris is 180 pounds, and in the next he's 220; and he's got long hair in one and short hair in the other,” Donner said. “Somehow Mike put it together and made it work.”

Even more difficult, a creative decision on the first film robbed the second of its original ending — Superman turning back time to save Lois.

“We didn't like the ending of I, so we stole the ending from II,” Donner said. “Then we didn't know how we were going to end II, and that question wasn't answered until Michael came up with it, and it's a great ending.”

The new version of Superman II is dedicated to the memory of Christopher Reeve. Donner said his best experience working on Superman was simply “meeting Chris, loving him and missing him.”