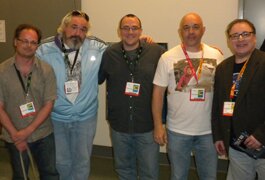 SAN DIEGO — In a sign of just how the annual San Diego Comic-Con International geek confab has come to include the entirety of pop culture, and not just genre fare, George Feltenstein of Warner Bros. played a clip from the new 60th anniversary Blu-ray of Singin’ in the Rain (which hits shelves July 17) to an enthusiastic crowd that gathered to learn some of the latest scoops in the realm of DVD and Blu-ray Disc extras July 12.

Once the room of attendees got the chance to absorb the crisp picture and pristine audio, Feltenstein shared how the latest technological advances brought the film to life in high-definition.

“We went all the way back to the beginning,” Feltenstein said. “And in this case the original negatives of Singin’ in the Rain burned in the tragic Eastman fire; the color negatives went up in flames in 1978. So we’re actually working with scanning at 6K the second-generation Technicolor preservation positive. They went in there and adjusted it pixel by pixel for ultra resolution, which they were not able to do 10 years ago.”

As much of a challenge that Singin’ in the Rain was, however, Feltenstein said the upcoming 3D Blu-ray release of House of Wax is even more problematic.

“The original negative of House of Wax was damaged in the lab and the emulsion was stripped off the original,” he said. “We have to go back into separation and scan them. It’s like doing six movies. All that is being scanned at 4K. My colleagues are writing a very big check, and you all are going to have House of Wax in 3D and it's going to look like a Viewmaster.”

Feltenstein had teased the House of Wax release at this panel last year, though the first of Warner’s classic 3D films to make it to Blu-ray will be Dial M for Murder Oct. 9.

Moderator Bill Hunt noted that the floodgates for catalog releases on Blu-ray seem to have been kicked wide open.

“It’s been a pretty interesting year as far as Blu-ray and for home video in general,” Hunt said. “You’ve got the catalog floodgates opening up in ways they haven’t in a long time.”

Panelists also praised manufactured-on-demand DVDs as a way to release catalog titles that otherwise would never reach market. In particular they singled out the Warner Archives MOD unit.

“This is like a renaissance for home video classics that never came out on VHS or laserdisc.” Feltenstein said. “We’re now at 1,300 titles. And it’s extended to television series.”

“The reason it never came out before is because it was shot in 16mm,” Feltenstein said. “We don’t let that stop us. That's the way it looks. We are pushing the boundaries of making everything available.”

Another TV restoration project heavily on display was the Blu-ray of Star Trek: The Next Generation — Season One, due July 24 from Paramount Home Media Distribution and CBS Home Entertainment. Robert Meyer Burnett, who produced new extras for the release, showed off a cast reunion he filmed for the upcoming second-season Blu-ray.

“It’s kind of an involving free form conversation with the cast,” Burnett said. “As producers we're always trying to find new and interesting things to do. This was an amazing thing to see. It’s the kind of thing you go to conventions to see.”

Burnett praised the efforts to convert “Star Trek: The Next Generation” to high-definition, which involved a mix of re-compositing visual effects elements and some CGI to fix components that were lost or didn’t age well.

“There was no expense spared,” Burnett said.

An extra planned for a future season, Burnett said, involves putting some of the show’s top writers in a room and watching them pitch and develop the story for a brand new “TNG” adventure, which would be dubbed “Episode 179.”

Hunt asked how the process of making Blu-ray extras has changed over the years.

“Every time it's like reinventing the wheel,” said Charles de Lauzirika, who is working on the Blu-rays for Prometheus and The Amazing Spider-Man. “We keep wanting to get into this comfort zone, but every time it seems there’s a curve ball, or something from the studio, or changes in fans articulating what they want. The landscape is changing, and it’s getting harder in extremely frustrating ways.”

“It used to be a movie would be released on video six months after it was in theaters,” Stephenson said. “Now it’s about four months, and it’s getting closer to three months. You have to be done editing the disc before the film is shown to a single person.”

He said he got lucky producing the disc for The Hunger Games because its Aug. 18 release date is five months after its theatrical debut.

“We could treat it more like a catalog title and talk about the film's success,” Stephenson said.

Stephenson showed a behind-the-scenes clip from the Blu-ray detailing a scene in which star Jennifer Lawrence had to run through a forest as it burst into flames around her.

Todd Doogan of TheDigitalBits.com said he still enjoys commentary tracks, but noted that not all filmmakers were adept at making them, especially ones who just recap what’s happening on the screen.

“There's a sweet spot between a new release and catalog where the memory is fresh, but you have perspective on the film,” de Lauzirika said. “There's no perspective on new films, and 30 years after the fact they may not remember anything.”

Burnett noted that commentary tracks have become less common because directors don’t know how much more there is to say about the filmmaking process.

“People are very familiar with the process of making movies now,” he said. “Movies are pretty much all made the same way, and that familiarity has taken a luster off special features.”

Despite all the talk of nostalgia, the panel did discuss how technological advancements such as second-screen apps could affect the production of extras.

“If the content isn't interesting, it doesn't matter what the technology is,” Stephenson said.

• Two days before it even started, the convention got off on a somber note when a 53-year-old woman was killed July 10 after being hit by a car as she was attempting to get back in line to see a panel for The Twilight Saga: Breaking Dawn — Part 2. She had reportedly been camped out outside Hall H since Sunday for what was an early Thursday panel. Her death prompted other “Twilight” fans to wear black ribbons in her honor.

• The Lucasfilm booth gave away $25 gift cards for Sideshow Collectibles with preorders of the Indiana Jones: The Complete Adventures Blu-ray set, which was on display in a replica of the Well of Souls from Raiders of the Lost Ark, complete with live snakes.

• Shout! Factory was extremely busy during the convention. In addition to promoting its new line of “Mighty Morphin Power Rangers” DVDs with a Comic-Con exclusive boxed set, a downtown mural and a 20-foot Power Ranger statue, the indie distributor unveiled a number of product deals.

First, it announced a two-disc Blu-ray set of “Astonishing X-Men” motion comics from Marvel Knights Animation would be released Nov. 13 for $34.99. The episodes adapt issues written by Joss Whedon, and include “Gifted,” “Dangerous,” “Torn” and “Unstoppable,” the latter of which will be released as a standalone DVD as well at $14.97.

In addition, Shout! Factory extended its distribution agreement with Hasbro Studios for home entertainment rights to “Kaijudo: Rise of the Duel Masters” and “Transformers: Rescue Bots.”

• A block from the convention center, Cartoon Network partnered with The New Children’s Museum to promote “Adventure Time,” the first season of which was released on DVD July 10. Fans who solved a series of puzzles were treated to unique interactive “Adventure Time” content.

• Warner Bros.’ “Extras at Comic-Con” fan festival featured a display of all six Batmobiles from TV and film, from the 1960s Adam West version to the tumbler for upcoming The Dark Knight Rises. Warner offered fans a sneak peek at a documentary called The Batmobile, which reportedly will appear on the eventual The Dark Knight Rises Blu-ray.

• The Fox booth offered preorders of the I, Robot 3D Blu-ray, giving fans a chance to order the title in a Comic-Con exclusive limited-edition robot head package for $99.99.

• LG Electronics USA showcased its 3DTVs and mobile phones in partnership with Legendary Entertainment, providing trailers and sneak peeks of future films and related content on its line of Cinema 3D Smart TVs and smartphones with 3D and True HD displays. Attendees could also participate in a contest to win a variety of prizes.

— Erik Gruenwedel contributed to this story