Too Late for Tears (Blu-ray Review) 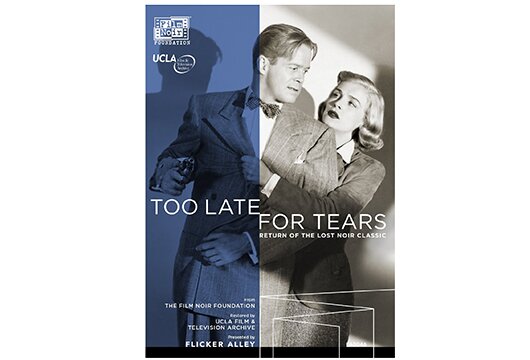 Nearly everyone who’s seen this once nearly lost 1949 film noir mean-ie notes that with it, Lizabeth Scott became the one actress in screen history who managed to make Dan Duryea look sympathetic — and this is a movie in which he starts out by slapping her around (a kind of stock-in-trade early in his career). Well, Scott is such a piece of work here that one can only chuckle at her character’s rabid greed after this so-called housewife flukes her way into a tempting situation that immediately swallows her up and ends up destroying lives. By this time working independently, former MGM producer Hunt Stromberg — of Pride and Prejudice, the “Thin Man” pics and The Women — elected to take a walk on the wild side (though, actually, The Women is pretty wild on its own terms).

It isn’t so much that previous prints of Too Late for Tears were terrible, but more like the print was, given that so much of what got shown (if you want to so term it) came from the same 16mm copy that wouldn’t die for decades. As with Flicker Alley’s concurrent release of another noir goodie (Woman on the Run), this arguably definitive Scott performance and more were saved from extinction by UCLA’s Film and Television Archive working with the Film Noir Foundation to juggle various imperfect sources (a shot here, a soundtrack there and so on). This United Artists indie wasn’t exactly distinguished by budgetary excess anyway — director Byron Haskin shot it on the Republic lot — but this is quite the night-day improvement over Image Entertainment’s 2003 Dark City DVD release. Not that there’s a whole lot of outdoor daylight on the Tears premises.

Married to working stiff Arthur Kennedy after her first husband met his end under possibly suspect circumstances, Scott has never been one to deny seething lifelong resentment over her family’s relegation to the fuzzy end of the lollipop, as Marilyn says in Some Like It Hot. So when a nocturnal highway cruise ends with someone in a passing-by auto mistakenly tossing a briefcase into the Scott-Kennedy open convertible, life priorities are bound to change when the contents turn out to be enough dirty cash to clean up Scott’s self-image (or so she fantasizes). Kennedy’s desire is to high-tail it to the authorities or, more reluctantly, at least to sit on this crooked windfall for a while. His wife’s is to vacuum some department stores on a shopping spree, and guess who wins out? Though soon, there’s a Duryea knock on the door and a demand for his money, though you can bet he didn’t come into it by selling Boy’s Life subscriptions door-to-door.

To these, add a comely Kennedy sis who lives across the hall (Kristine Miller) and a mysterious visitor (Don DeFore) claiming to be an old war buddy of her brother’s, who has now become a “missing person.” This is the movie’s dominant cast of five, though dependable character actor Barry Kelley has one of his trademark roles as a callous cop whose sensitivity training could probably use a little fine-tuning. Of the principals, Scott, DeFore and Miller (plus director Haskin) were borrowed from Paramount producer Hal Wallis, who owned their contracts — another from the Selznick school who would “buy” players without quite knowing what to do with them (future contractee Jerry Lewis also said that Wallis didn’t know a thing about comedy). Thus, the picture plays a little like a Paramount noir of the day, though without the production gloss — which isn’t to say that the cinematography by William C. Mellor (who’d soon become director George Stevens’ cameraman of choice to the tune of two Oscars) doesn’t get a discernible boost from this restoration.

The source material here is a novel by Roy Huggins, who later became perhaps the most successful TV producer of my childhood and early adolescence (which still makes me wonder why Warner Archive hasn’t begun to issue his boomer-essential “77 Sunset Strip” to fortify what remains of the “Kookie contingent”). The Production Code censors kept themselves busy — apparently they counted Duryea slaps and forbade mention of the word “cyanide” — but the Huggins script does result in a couple of genuinely flesh-and-blood characterizations, including Duryea’s disintegration after getting way in over his head (an acting stretch he nails). The big casting mystery one takes away here is why Miller didn’t become a bigger star instead of just a future TV regular. In another of his informative but also infectiously wry commentaries, historian/writer/programmer Alan Rode notes (while adding the p.c. caveat, “as they used to say”) that Miller was “built.” Here; she’s kind of a girl-next-door-type whose bedroom window you want to shimmy up the drainpipe into — though as the nearby Scott/Kennedy across-the-hall neighbor, she’s a product of L.A. apartment living. There are so many drop-ins and door knocks at our gold-digger’s digs that the movie sometimes suggests a really perverse Southern Cal edition of “Friends.”

As with Woman on the Run, Flicker Alley has really dolled up the release with cool production photos and press-book ads (glossy paper, too), some on-screen nuts-and-bolts regarding the restoration and a Brian Light essay whose production backgrounders include discussion of the Huggins-Haskin insult fallout after the film’s box office failure put the first nail in Stromberg’s career coffin. In addition to his commentary, Rode also appears in a “making of” short that, in terms of home market commentary specialists, suggests MGM’s old “all the stars in heaven” ad-copy tagline thanks to the added participation of Julie Kirgo, Kim Morgan and Eddie Muller as well.

New on Disc: 'Too Late for Tears' and more …