Sony: HBO Go Coming to PS3, With PS4 to Follow 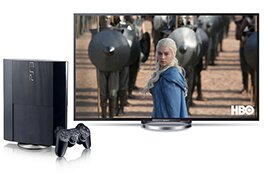 Sony Computer Electronics Jan. 16 said HBO’s TV Everywhere app — HBO Go — will soon be available on the PlayStation 3, with availability on the new PlayStation 4 console to follow, according to a blog post by Phil Rosenberg, SVP of business development for SCEA.

Considered the benchmark of TV Everywhere platforms, HBO Go enables authenticated HBO subscribers access to on demand and some live programming, including “Game of Thrones,” “Boardwalk Empire” and “True Detective,” among others. HBO Go offers every episode of every season of HBO programming, including movies, sports, documentaries, and comedy specials, as well as special behind-the-scenes extras — much of it in HD.