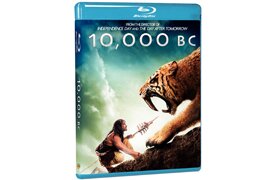 For those who missed its much-hyped but short-lived theatrical run, 10,000 B.C. follows the quest of D’Leh (Strait) as he faces off against the Warlord (Ben Badra) to rescue the beautiful Evolet (Belle). The film is set in an alternate universe that blends prehistoric creatures with science-fiction and really bad 1980s metal hair. As a home entertainment experience, 10,000 B.C. moves along at a fast clip and focuses more on action than dialogue, which is a good thing.

The film looks amazing in HD in this 1080p/VC-1 encode (2.40:1) transfer, at least when the its exotic locations are featured. When it comes to some of the sets and the CGI, especially when there’s a lot of movement, the HD actually accentuates a shoddy job by the filmmakers.

In the audio department, Warner offers both a Dolby TrueHD 5.1 Surround track and a standard Dolby Digital 5.1 Surround. Considering the cacophony of battles and creatures in this film, the dialogue comes out crystal clear. (Unfortunately, said dialogue is so ludicrous you wouldn’t mind missing it.) The excellent sound also points out how wrong the film’s score by Harold Kloswer and Thomas Wander is for the on-screen action.

Warner has built a solid reputation with delivering exclusive bonus materials for many of its BD releases. Strangely, the two exclusive featurettes for this film are only available in standard-definition. “A Wild and Wooly Ride” (13 minutes) features Emmerich and his special effects team explaining how they made the film’s CGI creations. “Inspiring an Epic” (13 minutes) includes interviews with Emmerich and Fingerprints of the Gods author Graham Hancock, whose book served as the catalyst for this movie (although Emmerich took much creative freedom with his script).

Rounding out the extras that are also available on the DVD release are about 14 minutes of deleted scenes that are boring, with the exception of the three-minute alternate tiger pit sequence, and a lackluster alternate ending. There’s also a digital copy of the film available for iPods or Windows Media with a code on the inside of the BD case.