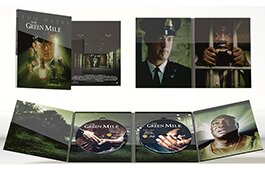 On Sept. 30, the first group of Diamond Luxe Edition releases include anniversary editions of The Green Mile, Gremlins, Natural Born Killers and Forrest Gump. Ben-Hur will also be offered in a new two-disc Blu-ray edition. All are available for $24.98 SRP.

The Luxe Editions feature a more sleek and functional than traditional Blu-ray packaging, ensconced in half-inch case featuring a photographic image and title treatment. The case opens into a two-fold with two additional impactful images and then again into four panels with a panoramic photo and two slots for the discs.

Warner eyes the new packaging as a means of solidifying its Blu-ray catalog sellthrough market share, in addition to creating a new brand identity with movie enthusiasts and collectors.

“While mainstream home entertainment packaged media may have peaked, there still is a substantial audience of movie enthusiasts for many titles from our theatrical library, the largest of any studio,” Jeff Baker, EVP and GM of theatrical catalog at WBHE, said in a statement. “These consumers demand not only extra features but also packaging that’s aesthetically pleasing and durable. We are looking forward in the future to judiciously releasing films utilizing this new and innovative packaging.”