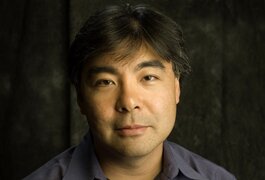 As a charter member of the Blu-ray Disc Association and manufacturer of Blu-ray disc players, Panasonic was at the center of the format war with HD DVD and has been on the forefront ever since, promoting the next-generation-packaged media to consumers and retailers.

Riding shotgun throughout it all has been Eisuke Tsuyuzaki, VP of corporate development of Panasonic Corp. of America and GM of its Blu-ray Disc Group.

A fixture at conventions, conferences and trade shows, Tsuyuzaki isnÆt just regurgitating marketing hype. He truly believes Panasonic has staked much of its consumer electronics success on widespread adoption of Blu-ray. To him, Blu-ray is much more than a new format; it is ground zero of a burgeoning high-definition universe.

Home Media Magazine checked in with Tsuyuzaki for a status report on the new home entertainment world order.

What IÆve always said is that Blu-ray completes high-definition. It not only ties together packaged media and laptops; it also does authoring, archiving and other things. Blu-ray has always been in the center of this HD universe.

So from a strategic point of view, it is critical to the health and growth of our industry.

Tsuyuzaki: The CE industry has always focused on one product category at a time. To me, Blu-ray is not just another disc player. At Panasonic, we have this theme called ôLiving in High-Definitionö to capture all of the CE products we are trying to do. We are giving [a high-def home experience] to 100 families across the United States for feedback. We are an official sponsor of the Beijing Olympics, which is another HD event. We have four trucks running around the country at retail and certain events that demonstrate HD on 103-inch displays.

Working with the studios, because you need Blu-ray content, weÆve worked with Disney (mall tour, Sleeping Beauty BD Live gala) and 20th Century Fox at NASCAR events in California. We will continue to do more, as this fourth quarter will be a critical time because once you see [Blu-ray], you get it.

Tsuyuzaki: I think it is a very effective way. Once you have seen it ù the picture, sound, interactive applications ù the light bulb goes on and people get the ôaha.ö

Tsuyuzaki: We have Blu-ray endcaps at retail. Most of the marketing dollars are going into the retail environment and not just into generic promotions on awareness. We are putting our money at retail. The picture quality is a strong component of it. Another component is the 7.1 surround sound.

Tsuyuzaki: I wouldnÆt call it the killer app. There are two types of Blu-ray. The profile 1.1 is so-called bonus view [picture-in-picture], which is for people who like the basic playback experience of DVD. The profile 2.0 BD Live is really another world on top of Blu-ray. Some people want it, some people donÆt want it and others are trying to figure out what they want to do with it.

BD Live is a universe and not an application.

Tsuyuzaki: No. Our current Panasonic offerings include a bonus view player and BD Live player. They are priced differently because they cater to slightly different segments of the market. Time will prevail. It is not designed that one [profile] will win. The format, unlike HD DVD, has two different versions. ItÆs not as if one is better than the other. It has two different flavors.

Tsuyuzaki: That is more of a marketing job. And it depends how quickly we can bring forward this universe called BD Live. If that is not compelling enough, then it is going to flounder. By working with the studios, we think there is a compelling layer, and it is really for consumers to decide whether they really like it or they like their current [DVD-like] experience. We think you need to push the bar. As a manufacturer, we like to push the bar.

Tsuyuzaki: When we had VHS, I was very happy with the state-of-the-art 20-inch televisions. When DVD came around, I think the state-of-the-art TV was 32 inches. What you are seeing now from our company is on average we sell 50-inch flat-screen TVs. People are buying flat-screen TVs by the millions. When you have such a big screen, and it is demonstrated correctly what that TV is capable of, then Blu-ray becomes a natural complement to that proposition.

To those people who say they are happy with standard DVD, when you are connected to a big-screen TV, the detail just isnÆt there.

Tsuyuzaki: Blu-ray is also an upconverting DVD player. Many people forget that Blu-ray plays back standard DVDs. Right now we cannot dismiss the impact of the standard-DVD market. But what I am seeing is that the DVD player is shifting to your second room, or den or bedroom. We are in a state of transition of formats, so DVD is primarily used in home-theater-in-a-box applications, in portable applications and DVD recorders. ThatÆs where we still see DVD having some meaning.

We do sell DVD players, but for your living room, you are looking for a Blu-ray player. ItÆs as simple as that.

Tsuyuzaki: Titles will drive the business. There is no doubt about that. It is a symbiotic relationship with titles that will certainly help drive adoption. Hopefully it is not just the title, but what it can do for you. There will be a few titles at the end of the year that will have BD Live. I hope some will have 7.1-surround sound, which we havenÆt fully demonstrated yet.

Tsuyuzaki: Is this an industry comment or Panasonic? (laughing) The right answer is that the retailer is going to decide that. What you are seeing already is that at $399, we canÆt make enough Blu-ray players. We (Panasonic, Sony, Pioneer) all have been airfreighting for the last four months straight. The demand seems to be robust. I think we are on our way to sales of 3.5 million players. If you add that to cumulative year-to-date sales, that is a very healthy robust number going into mainstream adoption.

When it comes to mainstream, certain manufacturers will look at pricing. Last week, online blog site Endgadget said we smoked the competition. Hopefully, there is value in things like that.

Tsuyuzaki: Tremendous success. From a hardware point-of-view, I think there will be 20 million Blu-ray devices sold due to SonyÆs PlayStation 3, players and laptops, which are an underserved area. As we transition toward HD, Blu-ray is going to complete the whole experience. It is inescapable.