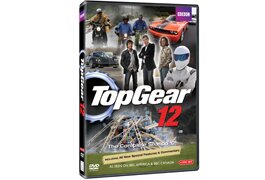 In addition to being the first “Top Gear” DVD set with extras, Top Gear 12 includes a guest appearance by Jay Leno in the seventh episode. After a quick glimpse at Leno’s legendary car collection, the segment features Leno cracking a few jokes as he gives his thoughts on the Honda Clarity, which runs on hydrogen.

It’s the perfect stage setter for a bigger segment on Leno in the 13th season of the British car-enthusiast show.