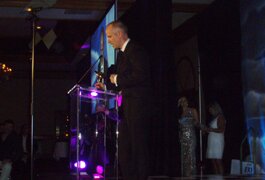 Don Handfield, writer and director of Anchor Bay’s ‘Touchback,’ accepts the trophy for Best DVD/BD Release at the Saturn Awards.

“Touchback was a very special project for all involved,” said Touchback writer and director Don Handfield. “This recognition from the Academy is greatly appreciated and humbly accepted.”

“From zombies and super heroes to some of the best science-fiction stories ever created and the most awesome images of fantasy ever seen, this was a truly phenomenal year for genre entertainment, which is now the very heart of the entire entertainment industry,” said Robert Holguin, president of the Academy of Science Fiction, Fantasy & Horror Films.