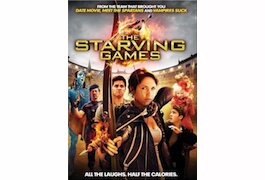 Parlaying some success from their involvement with Scary Movie, the team of Jason Friedberg and Aaron Seltzer have written and directed some god-awful parody movies over the past few years, including Date Movie, Epic Movie, Disaster Movie, Meet the Spartans and Vampires Suck, each seemingly worse than the last. Their track record of running that particular sub-genre of comedy into the ground doesn’t exactly inspire confidence in The Starving Games, a rather obvious spoof of The Hunger Games.

But while the end result is pretty terrible, it has its moments.

Frequent TV guest actress Maiara Walsh stars as “Kantmiss Evershot” (har har), who runs through the general story arc of a heroine subjected to a deadly competition designed by a future dystopian government to pacify the masses. She carries the film as well as could be expected, and fortunately the story requires her to be on screen a lot. The opportunity to swim in her baby blue eyes is probably the best thing about the movie.

The film pulls off its best jokes when the script actually tries to demonstrate some insights about the subject it’s targeting. For example, when the president (Diedrich Bader) explains how he invented the concept of the Hunger Starving Games after watching The Running Man and Japan’s Battle Royale.

However, most of the gags are just stale riffs on random pop culture references typical of these kinds of movies.