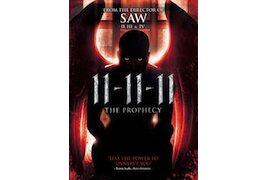 For me, the real fun of 11-11-11: The Prophecy on DVD is not the film — an average psychological thriller with heavy religious overtones — but the way director Darren Lynn Bousman uses his commentary to gripe against the vagaries of the entertainment industry.

On the one hand, he didn’t have enough time or money to properly finish the film, so he kind of had to fudge the details (personally, I think the ending he came up with works well enough for what the story establishes).

On another hand, there’s the problem of Internet piracy, and how an early cut of the film leaked online and was downloaded thousands of times, unfairly ridiculed by many before Bousman had a chance to clean it up.

And finally, he regrets (with immense understanding) that the realities of Hollywood marketing have caused his association with the “Saw” franchise (he directed films 2-4) to be slapped on every ad for the film (and on the DVD box art as well). Coupled with a trailer campaign that doesn’t quite fit the tone of the final film, the marketing may have caused some horror fans to view the film expecting something a lot more shocking.

The film they got is light on horror and heavy on ominous dialogue, centered on an author named Joe who has turned his back on religion after the death of his wife and son. But what Joe can’t ignore is the recurrence of the number 11 in his life. His mother died on Nov. 11 (11-11), and his son died at 11:11. Some rudimentary Internet research informs him that 11:11 p.m. on Nov. 11, 2011 (11-11-11) may signal the opening of a doorway to hell.

He consults with his brother, Samuel, a preacher living in Barcelona. Samuel says the 11s are coincidence, but then suffers his own mysterious circumstances as a local old man tries to kill him, and Joe saves him from a falling chandelier. Joe’s father tells him Samuel was a miracle child, born after his mother was told she couldn’t have more kids, and that Joe’s purpose in life is to protect him. And then, on 11-11-11, Joe’s father dies.

The connection between numerology and apocalyptic mythology is nothing new in film, and I was reminded heavily of the Nicolas Cage vehicle Knowing from 2009. But unlike that film, which presented a true puzzle to solve, 11-11-11 mostly circles around itself with philosophical discussions as the characters try to discern greater meaning in their lives before a final twist that answers most if not all the questions the film is posing.