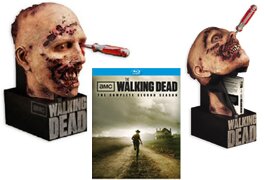 The four-disc sets will include all 13 episodes of the series, which follows a group of survivors following a zombie apocalypse, plus exclusive behind-the-scenes footage, featurettes and audio commentaries.

In addition to the $59.98 DVD and $69.99 Blu-ray editions, Anchor Bay will release a limited-edition Blu-ray at $99.99 that will come in a zombie-head case
created by McFarlane Toys.