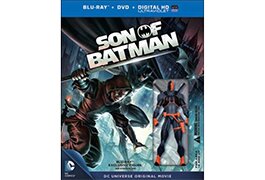 As the slow period for major new releases continues, the biggest retail news for the May 6 titles involved Warner’s Son of Batman.

Walmart had early availability of the two-DVD special edition of the film, a version available everywhere else June 17.

Walmart also had exclusive availability of the movie Ragamuffin, from Millennium Entertainment, for $12.96. The movie is based on the story behind the song “Awesome God.”