<< Milestone Launches MOD Line | Blog Home | From 'The King's Speech' to 'The Queen': The Role of the Monarchy in Modern Times >>

‘Star Wars’ Blu-ray Extras May Not Satisfy All Fans

Lucasfilm and 20th Century Fox Home Entertainment May 4 announced the extras for the “Star Wars” saga on Blu-ray Disc, which was confirmed for a Sept. 16 street date in North America.

The announcement came as part of a punny promotion (“May the 4th Be With You!”) that includes a viral campaign and preview video at Maythe4th.StarWars.com.

Fans can buy three-disc sets for the original or prequel trilogies, or a nine-disc set containing all six films. The only extras with the individual trilogy editions include two commentaries per film. One of the commentaries appears to be from the DVD versions, the other assembled from archival interviews.

The saga set comes with a bonus disc for each trilogy that includes deleted, extended and alternate scenes; prop, maquette and costume turnarounds; matte paintings and concept art; cast and crew interviews; and a flythrough of the Lucasfilm Archives.

The fact that the deleted scenes are available only with the six-film set is bound to tick off a few “Original Trilogy” purists, especially since we don’t yet know exactly which deleted scenes are going to be included. It’s a good bet, though, that if the set doesn’t include the original footage of Luke on Tatooine with Biggs and his friends, there may be riots.

The ninth disc is called “Star Wars Documentaries” and includes:

• 2007’s Star Warriors, an 84-minute profile of the 501st Legion, a fan group of Star Wars costume enthusiasts
• The 2010 retrospective “A Conversation With the Masters: The Empire Strikes Back 30 Years Later”
• A 91-minute collection of “Star Wars” spoofs from the likes of “Family Guy,” “The Simpsons” and Weird Al Yankovic
• The 1977 vintage featurette “The Making of Star Wars”
• The 1980 vintage featurette “The Empire Strikes Back: SPFX”
• The 1983 vintage featurette “Classic Creatures: Return of the Jedi”
• The 1997 “Special Edition” featurette “Anatomy of a Dewback”
• The 2007 documentary “Star Wars Tech,” a look at the technical aspects of the saga’s sci-fi vehicles, weapons and gadgetry

Longtime fans might be more interested in what’s not included on that list, such as the excellent 1983 From Star Wars to Jedi TV special that had been previously released on VHS, and Kevin Burns’ excellent 2004 documentary Empire of Dreams: The Story of the ‘Star Wars’ Trilogy, which was included with the 2004 trilogy DVD set.

Also of note is that these sets include George Lucas’ special editions of the original trilogy. The unaltered theatrical editions were released on DVD in 2006 but have never been remastered, so it was unlikely they’d make it to Blu-ray anyway. If you want them, though, they’re out there.

Not as clear is whether Lucas has decided to make any additional alterations to the films for Blu-ray (as he did with their earlier DVD releases). We know he’s been tinkering with a CG Yoda for The Phantom Menace to replace the ugly puppet they used, but maybe he’ll finally restore the “Han Shot First” scene as well.

Anyway, here's the box art and the original press release: 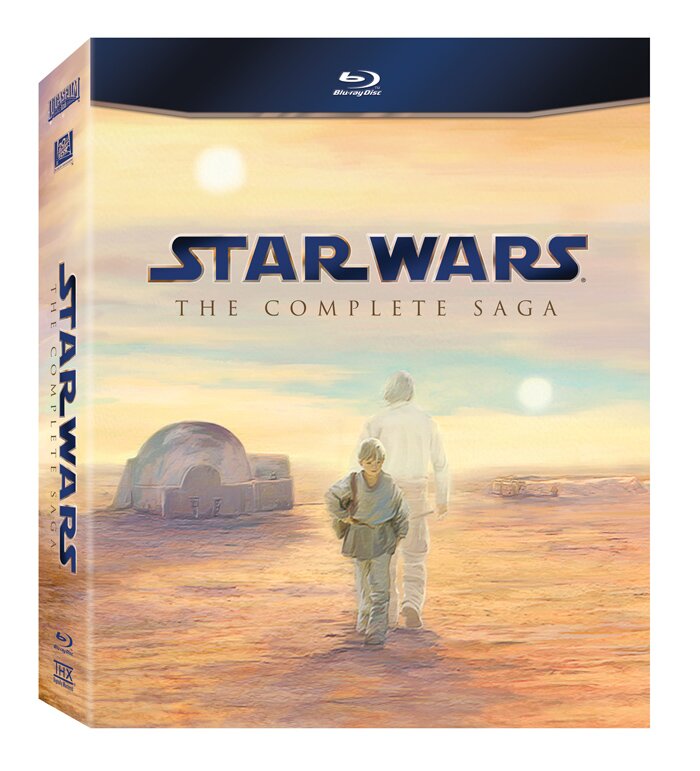 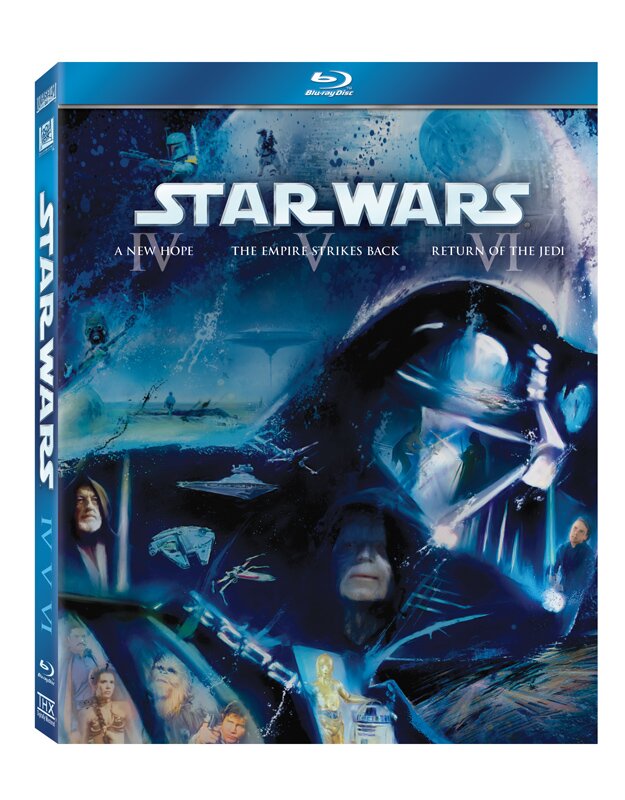 The Complete Saga Debuts on High-Definition Blu-ray This September

SAN FRANCISCO, Calif. (May 4th, 2011) – Bring home the adventure and share Star Wars™ with your whole family – when STAR WARS: THE COMPLETE SAGA comes to Blu-ray Disc from Lucasfilm Ltd. and Twentieth Century Fox Home Entertainment! To be released beginning on September 12 internationally and on September 16 in North America, the nine-disc collection brings the wonder of the entire Saga direct to your living room, where you can revisit all of your favorite Star Wars moments – in gorgeous high definition and with pristine, 6.1 DTS Surround Sound. Dive deeper into the universe with an unprecedented 40+ hours of special features, highlighted by never-before-seen content sourced from the Lucasfilm archives.

The comprehensive collection also features numerous deleted, extended and alternate scenes, new documentaries and a cross-section of the countless Star Wars spoofs that have appeared in pop culture over the past three decades. Marking the first time ever that the full Saga is available in one complete collection, STAR WARS: THE COMPLETE SAGA ON BLU-RAY also features a coveted peek into the making of the Saga with vintage documentaries, audio commentaries, behind-the-scenes moments, interviews, prop and costume turnarounds, retrospectives and more.

Episodes I-III and IV-VI will also be available as distinct Blu-ray Trilogy collections.

Fans will get an exclusive first look at some of the collection’s extensive special features at this year’s San Diego Comic-Con International – which marks Lucasfilm’s 35th anniversary as a Comic-Con presence. In 1976, the fledgling film company was looking for innovative, grass-roots ways to promote its underdog release, a film no one expected to succeed – a space opera known (at the time) only as Star Wars. One of the first film companies to reach out directly to core audiences by way of fan conventions, Lucasfilm will return to the venue to showcase the full evolution of the epic story with a special first look at STAR WARS: THE COMPLETE SAGA ON BLU-RAY.

Special Features:
STAR WARS: THE COMPLETE SAGA ON BLU-RAY is presented in widescreen with 6.1 DTS Surround Sound. Special features include:
· DISC ONE – STAR WARS: EPISODE I THE PHANTOM MENACE

o Including: deleted, extended and alternate scenes; prop, maquette and costume turnarounds; matte paintings and concept art; supplementary interviews with cast and crew; a flythrough of the Lucasfilm Archives and more

o NEW! Star Warriors (2007, Color, Apx. 84 Minutes) – Some Star Wars fans want to collect action figures...these fans want to be action figures! A tribute to the 501st Legion, a global organization of Star Wars costume enthusiasts, this insightful documentary shows how the super-fan club promotes interest in the films through charity and volunteer work at fundraisers and high-profile special events around the world.

o NEW! A Conversation with the Masters: The Empire Strikes Back 30 Years Later (2010, Color, Apx. 25 Minutes) – George Lucas, Irvin Kershner, Lawrence Kasdan and John Williams look back on the making of The Empire Strikes Back in this in-depth retrospective from Lucasfilm created to help commemorate the 30th anniversary of the movie. The masters discuss and reminisce about one of the most beloved films of all time.

o NEW! Star Wars Spoofs (2011, Color, Apx. 91 Minutes) – The farce is strong with this one! Enjoy a hilarious collection of Star Wars spoofs and parodies that have been created over the years, including outrageous clips from Family Guy, The Simpsons, How I Met Your Mother and more — and don’t miss “Weird Al” Yankovic’s one-of-a-kind music video tribute to The Phantom Menace!

o The Making of Star Wars (1977, Color, Apx. 49 Minutes) – Learn the incredible behind-the-scenes story of how the original Star Wars movie was brought to the big screen in this fascinating documentary hosted by C-3PO and R2-D2. Includes interviews with George Lucas and appearances by Mark Hamill, Harrison Ford and Carrie Fisher.

o The Empire Strikes Back: SPFX (1980, Color, Apx. 48 Minutes) – Learn the secrets of making movies in a galaxy far, far away. Hosted by Mark Hamill, this revealing documentary offers behind-the-scenes glimpses into the amazing special effects that transformed George Lucas’ vision for Star Wars and The Empire Strikes Back into reality!

o Classic Creatures: Return of the Jedi (1983, Color, Apx. 48 Minutes) – Go behind the scenes — and into the costumes — as production footage from Return of the Jedi is interspersed with vintage monster movie clips in this in-depth exploration of the painstaking techniques utilized by George Lucas to create the classic creatures and characters seen in the film. Hosted and narrated by Carrie Fisher and Billie Dee Williams.

o Anatomy of a Dewback (1997, Color, Apx. 26 Minutes) – See how some of the special effects in Star Wars became even more special two decades later! George Lucas explains and demonstrates how his team transformed the original dewback creatures from immovable rubber puppets (in the original 1977 release) to seemingly living, breathing creatures for the Star Wars 1997 Special Edition update.

o Star Wars Tech (2007, Color, Apx. 46 Minutes) – Exploring the technical aspects of Star Wars vehicles, weapons and gadgetry, Star Wars Tech consults leading scientists in the fields of physics, prosthetics, lasers, engineering and astronomy to examine the plausibility of Star Wars technology based on science as we know it today.

ABOUT STAR WARS
The May 25, 1977 theatrical debut of Star Wars - on a scant 32 screens across America - was destined to change the face of cinema forever. An instant classic and an unparalleled box office success, the rousing "space opera" was equal parts fairy tale, western, 1930s serial and special effects extravaganza, with roots in mythologies from cultures around the world. From the mind of visionary writer/director George Lucas, the epic space fantasy introduced the mystical Force into the cultural vocabulary, as well as iconic characters such as evil Darth Vader, idealistic Luke Skywalker, feisty Princess Leia, lovable scoundrel Han Solo and wise Obi-Wan Kenobi. Since its 1977 debut, Star Wars has continued to grow, its lush narrative expanding from modest beginnings into an epic, six-film Saga chronicling the fall and redemption of The Chosen One, Anakin Skywalker.