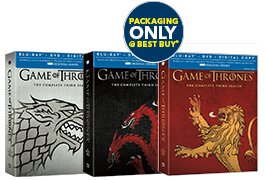 A light week of new releases Feb. 18 offered almost no new theatricals on disc, with the biggest title being HBO’s third-season Blu-ray and DVD of “Game of Thrones.”

Target offered the Blu-ray with a bonus disc containing 90 minutes of exclusive content, including interviews with cast members and author George R. R. Martin, who wrote the books upon which the series is based. Target also touted paperbacks of Martin’s “Thrones’ books.

Best Buy offered a choice of three exclusive Blu-ray covers, each bearing the sigil of one of the families fighting for power on the show. Best Buy also offered a $50 savings off an HTC One with two-year activation, with the purchase of the third-season of “Game of Thrones.”