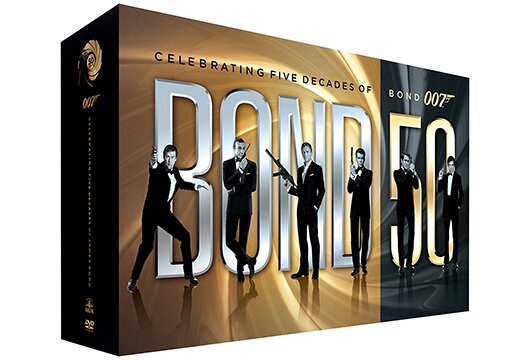 A so-called James Bond fan has apparently decided to test the patience of the legal system by claiming a boxed set of Bond films was advertised as complete when it really wasn’t.

Plaintiff Mary Johnson filed suit against MGM and 20th Century Fox Home Entertainment in the state of Washington in April claiming that two DVD/Blu-ray boxed sets — a 50th anniversary collection of 22 films released in 2012 and a 23-film set from 2015 — falsely claimed to include “'All of the Bond films gathered for the first time in this one-of-a-kind box set — every gorgeous girl, nefarious villain and charismatic star from Sean Connery, the legendary actor who started it all.”

That matter now finds itself in the court of U.S. District Judge Ricardo Martinez, where MGM is seeking a dismissal.

Johnson’s beef apparently is that the boxed sets in question included only the James Bond adaptations produced by EON Productions, the creators of the official Bond films since they debuted with Dr. No in 1962 with Sean Connery as author Ian Fleming’s suave superspy.

Spectre, the 24th EON adventure, was released in 2015 and starred Daniel Craig.

Over the years, various attempts by other producers to cash in on the James Bond phenomenon have popped up. A Bond parody loosely based on Casino Royale was released in 1967, and only because the producers happened to get their hands on the rights to Fleming’s first Bond book before the EON producers came along. A remake of 1965’s Thunderball called Never Say Never Again was released in 1983, and while it was touted as Connery’s return to the role of Bond, EON had nothing to do with it; the producer only had the rights to the story because he had worked with Fleming on a Bond movie project before EON came along, and when that fell through he was subsequently granted the legal right to the elements of that story, which he shopped around hoping to kick-start his own Bond franchise, to no avail.

Neither of these two films was included with the boxed set, to the surprise of no one who would consider themselves a true Bond fan. Various consolidations and legal maneuvers over the years have put these films into the MGM library and EON can basically do what they want with them, but they chose not to include them in the mega-set of Bond films. Understandable, for sure, given their rival status, though it would have been cool for the set to include them, given that those two tend to fall out of print easily and copies can get pricey on the secondary market.

Johnson’s attorney, Alexander Kleinberg, would have the case turn on the definitions of “all” or “every.” But really, let’s look at the heart of the advertising in question — what constitutes a “Bond Film.”

The 1967 Casino Royale, as stated earlier, is a spoof. So what’s its status as a “Bond Film”? Well, the plot involves an older spy named James Bond, played by David Niven, returning to duty only to find that a younger sex maniac (a clear reference to the Connery version of the character) is running around soiling his good name. To foil an evil plot, Niven is given control over the secret service and gives every agent the code name “James Bond” to confuse his enemies. So here, we basically have an admission within the film itself that it’s not a Bond film, as it acknowledges that Niven or anyone else in the film is not meant to be the same character as Connery’s Bond, who is the focus of the “Bond Films.”

Certainly, the Daniel Craig Bond is a reboot of the character, and thus also doesn’t share the backstory of his predecessors. But by then the character rights had unified under EON, who pretty much earned the right to determine what counts as a “Bond Film” and what doesn’t. And obviously, any movie they didn’t make wasn’t going to count.

One of the arguments made by Kleinberg was that the packaging required the purchaser to be a Bond expert to know the two non-EON movies weren’t going to be included. How such a non-Bond fan would similarly even notice the movies not being in the set is anybody’s guess, but I suppose such silly strains on logic are the realm for lawyerly endeavors.

For her part, Johnson is seeking class-action status on the case on behalf of anyone who bought the boxed sets thinking the other two films would be included. She claims that were it not for her belief those two movies would be included based on the labeling, she wouldn’t have paid $106.44 to Amazon.com for the set. Her suit cites legalese about false advertising having cause an “injury” to the plaintiff’s business or property. I suppose they mean she’s out the hundred bucks, although Amazon’s return policies are pretty lenient, so I’m sure she could have just sent the set back for a full refend. Of course, they'd still argue the inconvenience was the injury.

What’s really amusing is how the lawsuit cites both of the boxed sets, as if she bought the first one, didn’t like that it was missing the movies she wanted, and then three years later bought the re-released version with the additional film and still couldn’t figure out what was actually being sold, as if MGM fooled her twice.

Yes, I get she was probably fully aware of what MGM was doing with the sets to begin with and she thinks she’s “standing up for the little guy” against "the big bad corporate studios” and she envisions herself as a hero for all those who fell for MGM’s insidious trap.  But come on, this is beyond ridiculous.

The whole argument is based on what a “reasonable” person would think is in those boxed sets, which MGM’s lawyers pointed out listed the actual included films on the box. In a motion to dismiss MGM argued that “no reasonable purchaser would expect that a box set would contain films that are not included on the list of titles clearly printed on its packaging."

Kleinberg’s arguments against dismissal were filed May 15. The studio's attorney, John Devlin, has also asked the judge to at least deny the case’s class-action status on the grounds that the class definition, which would include anyone who purchased the discs, is "impermissibly overbroad." Naturally, Kleinberg disagreed, wanting the preserve the ability to achieve class certification in a wide variety of false advertising cases.

A hearing on the motion to dismiss is slated for May 26.

The full filing can be found in The Hollywood Reporter’s recounting of the story .