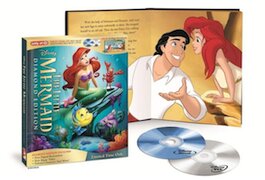 Target and Best Buy seemed determine to one-up each other in offering exclusives for four new titles that arrived Oct. 1.

The biggest of the new titles would seem to be the new Blu-ray edition of Disney's The Little Mermaid. Target offered a special version of the Blu-ray/DVD edition with a 32-page storybook for $24.99. Target also offered $6 off with purchase of the disc with a Sparkling Priness Ariel doll. Best Buy offered $5 off a special Little Mermaid lunchbox (regularly $9.99) when purchased with the Blu-ray.

For Warner's The Wizard of Oz 3D Blu-ray, Target offered the disc with a special lunch bag, while Best Buy offered the clasic with an exclusive collector's case.

For Fox's The Croods, Target offered the widely available Blu-ray/DVD boxed set that included a plush toy, while only Best Buy had the special plush pack-on with the 3D version.