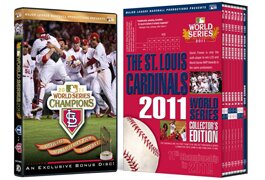 The “180” in common-wisdom thinking didn’t take long to kick in, aided by some 9th-inning scoreboard surprises in game 2 (and, as it turned out, not for the last time). Putting aside already motivated team partisans, it was roughly this point that thoughts quickly evolved from, “Why have so many Wild Card and otherwise lesser teams crashed the party in too many recent Series?” — to the realization that the St. Louis Cardinals (with, of course, a major Texas Rangers assist) were sparking one of the cream entries in postseason MLB contests from the past quarter century.

Even the calendar helped out: there’s something about a Series game 7 managing to occur on a Friday night that synchs so harmoniously with a footstool and a Bud (to keep it in the St. Louis vernacular).

Over the seasonal course of 162 games and then the prime-time cappers, the Cardinals began with the kind of season where their presumed staff ace Adam Wainwright (he of Cy Young Award caliber) was immediately rendered useless via a February trip to Tommy John Land. Much, much later, it became one where Cards skipper Tony La Russa was able to hang up his career cap with a smile amid a sudden retirement that both shocked and made sense. If this made it easy to root for the National League’s Series representative, there was also that wonderful visual to begin game 4 where good-guy Rangers manager Ron Washington gave youthful-looking starting pitcher Derek Holland an encouraging love tap on his cap. This made it tough to root against the Rangers.

The Cards beat the heavily favored Phillies in the prelim National League Division Series despite the fact that teams more than 10 games out in late August aren’t even supposed to be in the NLDS. And then the Cards advanced to a six-game NLCS victory over the Milwaukee Brewers — an ascension made possible, lest we forget, by pitcher Chris Carpenter’s 1-0 shutout over the Phillies in the NLDS deciding game 5, which is about what it takes when you’re facing the latter’s Roy Halladay in a money game. That Cards-Phils clincher is included as one of the bonuses on the World Series 2011 Fall Classic DVD and Blu-ray whose documentary portion is narrated by St. Louis native Jon Hamm. Like past MLB wrap-ups of any October action that has just transpired, it stands to rise or falls on the quality of the Series in question. The full evidence of how good this one was (20-hour running times have a way of making a case) is set forth in The St. Louis Cardinals 2011 World Series Collector’s Edition — the annual Series boxed which is naturally bathed this year in Cardinals red.

Games 1 and 5 were close and suspenseful, with game 7 only a little less so (though, of course, with even higher stakes). Game 4 featured a masterful 4-0 shutout by the previously cap-tapped Holland. In that early standout game 2, both teams traded zeros for six innings until the Cards went up 1-0 in the 7th inning; then the Rangers came through with a game-winning pair in the bottom of the ninth on consecutive sacrifice flies. Game 6 was one for the ages (more on this in a minute), and even the one blowout (game 3) was rife with history: In an evening of 16-7 fence busting, the Cards’ Albert Pujols became only the third player in Series history to hit three home runs in a single game, joining Babe Ruth (who did it twice in the 1920s) and REG-GIE Jackson in 1977. And Pujols waited until the game was halfway over to begin, having singled his first two times up.

Though game 6 was sometimes played as if its fielders were going more for a Golden Globe than Golden Glove, its excitement otherwise rivaled what we took away from game 6 of the Reds-Red Sox in 1975, when Boston’s Carlton Fisk put the extra-inning “f” in “folklore.” Early on in defense mode, both the Cardinals and Rangers played like the Bad News Bears — except that La Russa’s reaction was to cup his face between his hands a la vintage Macaulay Culkin instead of simply popping another tab on his beer can like Walter Matthau. Later, things got serious as the Cards were twice within a bottom-inning strike of elimination. Then St. Louis home-towner David Freese came through with a 9th-inning game-tying hit — followed a by a 10th-inning duplication of Freese’s feat after Texas had gone up again by two. This time, the clutch delivery came from the Cards’ injury-recovered Lance Berkman — who, depending on whether he is or isn’t bearded, suggests the later Elvis (post-“Burning Love,” pre-“Moody Blue,” but closer to the former). This set the stage for an 11th-inning Freese walk-off (“and we’ll see you tomorrow night”).

The boxed set proves that this was a Series to be savored as well as its oddities and not just because of that fielding in game 6. Allen Craig managed to hit three home runs (atop a couple big pinch hits) even though the Cards couldn’t work him into the starting lineup. And Cards reliever Arthur Rhodes finally made it into a Series after a well-travelled career that has seen him pitch for 10 teams. This had to have tickled Methuselah, who had Rhodes in his Topps Baseball Card collection as a kid.