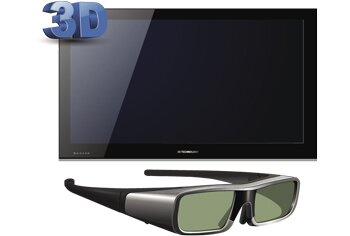 First-time study dispels misconceptions regarding 3D viewing in the home, including eyewear issues

Consumers who purchased a 3DTV and watch 3D content in the home overwhelmingly like the format, according to a new study released by DEG: The Digital Entertainment Group.

The study — comprised of more than 3,000 3DTV owners (86% male) who had purchased their sets within the past 15 months — found that 88% of respondents rated the 3D picture quality positive. Another 85% said they would prefer to see at least 50% of their TV programming in 3D.

Indeed, consumers said the majority of home entertainment in 3D is better than in 2D, with 3DTV owners naming feature films on Blu-ray Disc as their favorite 3D programming.
“The results of this landmark study clearly show that 3DTV owners are overwhelmingly happy with their 3D experience,” said Ron Sanders, president of DEG and Warner Home Video. “They are highly satisfied with the 3D picture quality, think they got a good deal on their 3DTV and have already started watching and collecting a variety of 3D movies, games and sports. This bodes well for the future of the home 3D category.”
That said, 3D adoption in the home has struggled to emulate theatrical 3D success due in large part to ongoing macroeconomic issues, cost of 3DTVs, required eyewear and dearth of content, among other issues.

Nonetheless, the study — conducted March 1 to March 31 by research firm SmithGeiger for the DEG — found that 80% of respondents said their 3DTV was only nominally more expensive than a comparable 2D unit. On average, respondents paid slightly more than $2,000 for their 3DTV, with more than half paying less than that.
Twenty-four percent of those who view 3D in the home said they watch more television — both in 2D and 3D — since purchasing their 3DTV.
Notable in the study is the finding that 83% of respondents said it took little or no time to adjust to wearing 3D glasses in the home. In addition, 74% own two or more pairs of glasses, with 33% buying an extra set during their initial 3DTV purchase.
More than half (52%) of these 3DTV owners also received at least one set of glasses bundled with their television. The average 3DTV household has more than two pairs of glasses underscoring the format’s popularity and frequency of viewing.

Additionally, 78% of these 3DTV owners said their sets also are viewed by their spouses or significant others; and 86% of these owners have children at home who also watch 3DTV on a regular basis.

Finally, 28% of respondents reported owning a PlayStation3 system, with 78% of these owners having already upgraded their PS3 to watch 3D movies, while 76% upgraded their PS3 to play 3D video games. Also 68% have already purchased a 3D video game, with 42% of gamers spending 25% or more of their game time in 3D. In addition, 40% of owners are receiving 3D content through a cable or satellite channel.