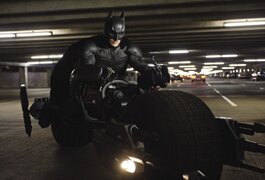 Warner, which includes Warner Bros. Home Entertainment Group and Warner Home Video, said revenue decreased 7% ($203 million) to $2.7 billion due primarily to difficult theatrical comparisons to the year-ago period, which included revenue from The Dark Knight Rises, as well as lower television revenue from theatrical product and the timing of subscription video-on-demand availabilities.

Dark Knight Rises, which was the final installment in director Christopher Nolan’s adaptation of the Batman franchise, generated more than $1 billion at the global box office, including $448 million domestically.

Through November 3, The Conjuring, We’re the Millers and Gravity have grossed over $310 million, $260 million and almost $430 million, respectively, worldwide at the box office.

Revenue from home video and electronic distribution of Warner theatrical content increased nearly 10% to $412 million. Through the first nine months of the year, Warner Bros. Home Entertainment Group has generated $1.35 billion from theatrical product — up 1.8% from last year.

Revenue from home video and electronic distribution of Warner television content declined 32% to $206 million. Through the first nine months of the year, home entertainment revenue from TV content is down 6.5% to $606 million.

In the quarter, Warner Home Video revenue dropped 9% in the quarter principally due to the timing of SVOD availabilities at the CW, which shifted from Q3 to Q4 this year as a result of the later start of its television season, according to CFO John Martin.

“In addition, we have seen some softness in the home entertainment sales of our television product as of late, including catalog,” Martin said in the fiscal call.

Meanwhile, Martin said Warner remains focused on digital distribution of content, buttressed by the near 50% increase industry-wide in digital sellthrough in Q3.

“We think that's an extremely positive sign for the future of the home entertainment business, and we're focused on improving the consumer experience in order to further accelerate the shift to digital ownership,” Martin said.

Finally, in September, Warner announced an expanded creative partnership with author J.K. Rowling, which spans all areas of “Harry Potter” businesses, including a new film series.