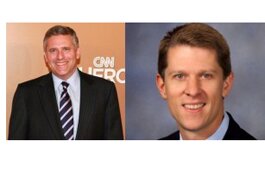 Martin, who has been a high-profile lieutenant to CEO Jeff Bewkes, has also been a vocal advocate for home entertainment. Martin, along with Bewkes, has been an early supporter of UltraViolet — the industry initiative intended to reinvigorate physical and digital sellthrough via a cloud-based storage system.

On recent fiscal calls, Martin has pledged continued support for UV while at the same time admonishing the industry for not taking a more aggressive approach marketing it to consumers.

“Frankly, we’ve lead the industry on this,” Martin said in May, while at the same time underscoring the importance of studio co-operation. “It’s particularly encouraging to see these signs of stabilization [in home entertainment] even as some of the industry’s digital initiatives, including UltraViolet, remain at a relatively early stage.”

Before assuming the CFO role in 2008, Martin was CFO of Time Warner Cable. Prior to joining TWC, Martin spent nearly 12 years at Time Warner, most recently serving as SVP of investor relations.

“John is one of the most capable and strategically minded executives I know,” Bewkes said in a statement. “As CFO, he led the design and implementation of our financial strategy that has helped Time Warner deliver superior shareholder returns. But he is also a broad and thoughtful business thinker whose inclusive management style and focus on driving the business forward will fit well with the Turner tradition. I have great confidence he will build on the success Phil has achieved to take Turner to even greater heights.”