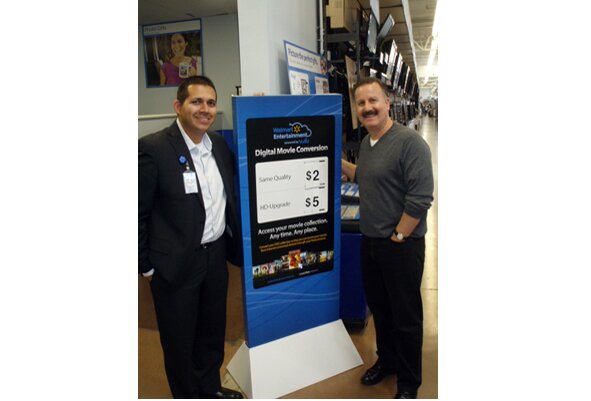 ROSEMEAD, Calif. — More than 4,000 movies from five major studios will be available under Walmart’s disc-to-digital program when it launches at more than 3,500 stores April 16, with the retailer and the studios supporting the initiative with a major ad campaign, including print and TV and in-store signage. (Download the full list here.)

Intended to prolong the life of disc, the program allows consumers to take their existing DVDs and Blu-ray Discs into Walmart and for a fee have a digital version of the title unlocked on Vudu.com, accessible through compatible consumer electronics devices.

The initiative also complements Hollywood’s UltraViolet initiative, the industrywide cloud-based storage platform, which allows buyers of new Blu-ray Discs to send a copy into a cloud-based digital locker that they can then retrieve at any time for viewing on any device. Digital files unlocked via Walmart disc-to-digital can be accessed through the chain’s transactional VOD and electronic sellthrough website, Vudu.com and many via UltraViolet as well. Not all Vudu-enabled titles will be available on UltraViolet right away.

UltraViolet now has more than 1 million users since its launch in October.

Mark Teitell, executive director and GM of Digital Entertainment Content Ecosystem, the cross-industry consortium behind UltraViolet, said he was “excited” that Fox titles now were part of UltraViolet through Walmart’s disc-to-digital service and Vudu platform.

“Walmart’s launch marks an important milestone in the evolvement of UltraViolet and the expansion of digital home video ownership. UltraViolet users will benefit from a broader set of capabilities, including ‘disc-to-digital’ upgrades for DVDs and Blu-rays, availability of UltraViolet-enabled titles for instant digital purchase via VUDU, and the added convenience of having easy access to UltraViolet-enabled titles from five leading studios in one shopping and viewing environment for the first time,” he said. “Taken together, we see this as a step-change in UltraViolet’s consumer value proposition that additional UltraViolet participants will build upon through their expected service and product launches in the year ahead.”

David Bishop, president of Sony Pictures Home Entertainment, said more than 1,500 feature films from the studio are part of the initial offering, and all will be available via UltraViolet as well.

“We’ve been pretty aggressive with digital in general,” he said, adding that the initiative would help consumers find confidence in both physical and digital purchases. “We think [this program] is a critical step to the continued momentum around UltraViolet. The early feedback we’re getting from analysts has been pretty positive.”

Walmart launched the disc-to-digital program April 9 for its employees, to help with training, and showed it off step by step to media April 11. Digital files cost $2 a disc, $5 to upgrade a DVD to high-def. A $2 Blu-ray digital transfer will be in 720p or 1080p, depending on a users' bandwidth.

“Obviously for us it’s a great way to drive traffic in the store, but it’s also meant to unlock value in the content consumers already own,” said Louis Greth, director of movies and home entertainment for Walmart. “For us, this is a big first step. The feedback is that it’s been very simple, very easy, not very complicated.”

Signage at front entrances and in the entertainment department of Walmart tout the program, showing the price for digital media conversions, with both Vudu and UltraViolet logos. Greth said the program will teach consumers about UltraViolet as well as Vudu.

Consumers who bring their discs in are directed to the photo or customer service departments. Once there, they’re asked to fill out a form listing titles, whether it’s a DVD or a Blu-ray, and whether they would like a standard definition or high-def version of their content. Consumers who already have a Vudu.com account are asked for their email and phone number. Those without an account are directed to sign up for one.

Walmart employees check to make sure the disc isn’t a pirated copy or a rental from outlets such as Redbox or Blockbuster, or that the disc hasn’t been used in the disc-to-digital program before. An employee makes sure the title is available in the program, unlocks either a standard-definition or high-def version of the film for the consumer’s email address, and then stamps the center ring of the disc with “Walmart Entertainment.” The process takes about one minute per disc.

Home Media Magazine brought in 10 Blu-rays to be transferred to digital. All were available in high-def, except for The Godfather, with Greth explaining that some titles are available in standard-definition only. Hundreds of major titles are available under the program, though there are some notable absences, including Avatar, Platoon and The Untouchables. A full list of available titles will be on Vudu.com, Greth said.

“As we continue to negotiate with the studios, more titles will become available,” he said. “In some cases there are digital rights issues.”

Once a consumer settles their bill, they’ll find the films unlocked on their Vudu account. Playing the titles back on connected consumer electronics devices requires consumers to link to their UltraViolet account or sign up for one at . The movies play instantly without an UltraViolet account on PCs.

“We want everyone involved,” Greth said. “Now we’re going after the other big players. We would love to have everybody involved with this.”

Greth added that Walmart wants to “unlock every movie possible” and that the disc-to-digital initiative “unlocks more value in your existing disc library, and we hope it makes people more confident buying DVDs.”

Craig Kornblau, president of Universal Studios Home Entertainment was on hand April 11 to test out the system himself. He brought his DVD copies of Liar Liar and Meet the Fockers.

“It’s wildly exciting and at the same time a bit daunting,” Kornblau said. “Think about the logistics of launching this at 3,500 stores with 4,000 titles. It’s a first, and I’m happy to see it being done by Walmart.”

To view images from the April 11 event at the Rosemead, Calif., Walmart, click here.