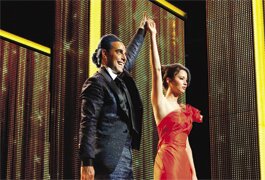 Lionsgate easily topped the national home video charts the week ended Aug. 19 with The Hunger Games. The futuristic thriller — well on its way toward spawning a successful franchise a la “Twilight” — sold an estimated 3.8 million Blu-ray Discs and DVDs its first weekend in stores (it was released at midnight on Aug. 18), according to Lionsgate.

Not surprisingly, the film debuted at No. 1 on both the Nielsen VideoScan First Alert chart, which tracks overall disc sales, and Nielsen’s dedicated Blu-ray Disc sales chart. On both charts, Hunger Games bumped the previous week’s top seller, Universal Studios’ The Lorax, to No. 2, outselling the latter by a nearly 4-to-1 margin in total disc sales (and nearly 5-to-1 on Blu-ray).

As evidence of Blu-ray’s mass appeal, 43% of Hunger Games unit sales were on the high-definition disc format.

Five other new releases made it into the top 10 on the overall disc sales chart. Season six of the hit TV show “Dexter” debuted at No. 3, followed at No. 4 by Universal’s Jaws, newly restored and remastered for Blu-ray as part of the studio’s 100th anniversary celebration.

On Home Media Magazine’s weekly rental chart, The Hunger Games bowed at No. 1, followed at No. 2 by 20th Century Fox’s The Three Stooges, fresh off its 28-day holdback from Netflix and Redbox. The prior week’s top rental, Universal Studios’ American Reunion, slipped to No. 3, while The Raid: Redemption debuted at No. 4.