‘The Perks of Being’ a Filmmaker 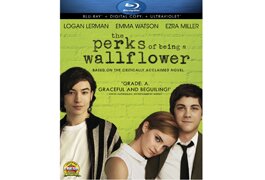 Stephen Chbosky wrote the semi-autobiographical bestselling novel The Perks of Being a Wallflower knowing that he wanted to turn the book into a movie that he would ultimately direct.

“I knew even if somebody else could have made a wonderful movie based on my screenplay, it wouldn’t have felt right to me, and how personal this story is,” Chbosky said. “I felt a big obligation to the fans of the book, and I could not risk somebody getting it wrong.”

Summit Entertainment, a Lionsgate company, brings Wallflower out of its shell and onto home video Feb. 12, with a Blu-ray Disc listed at $24.99 and a $19.98 DVD.

The emotional tale of a lonely high school freshman, Charlie (Logan Lerman), who gains a new perspective on life when he befriends senior stepsiblings Sam (Emma Watson) and Patrick (Ezra Miller) has resonated with many people throughout the years in its book form (it was published in 1998).

The coming-of-age story, set in 1990s Pittsburgh, has gone on to captivate a new audience with Perks being adapted for the screen.

“The unexpected and lovely magic trick of creating Perks is that every time somebody comes up to me and says that the movie or the book made them not feel alone, it actually makes me feel less alone,” Chbosky said. “Because if they tell me that I get them, that means that they get me. What I figured out at the end of this road is that there are a lot more of us than there are of them.”

The character of Charlie is loosely based on Chbosky, just as Patrick and Sam are pieces of real people in the filmmaker’s life. Chbosky, who has a new daughter Maccie Margaret, said he looks forward to the day when he can show his highly impactful project to her.

“What I’m hoping is that she will realize at a young age that her parents get what she’s going though a lot more than she thinks that we do,” he said. “… One of my missions for the movie was that I wanted to create a movie that young people would love because it validated and respected and celebrated what they’re going through every day, but at the same time, it would be nostalgic for their parents, so that they would remember what it felt like. And then maybe it would bring those two groups — that are so often at odds, that are so often silent with each other — maybe a little step closer to each other.”

Because Perks means so much to Chbosky and fans of the works, the writer-director made it a point to offer substantial special features, which are as scanned, mixed and scored as the scenes in the final movie.

“It’s funny, now that the DVD is coming out, I’m so excited about it because ... I love movies,” Chbosky said. “I’m a real cinephile. And, of course, any cinephile thinks that movies belong in a movie theater, but at the same time, I know that a theater is such a short life for a movie. With the DVD and the Blu-ray, the download, that’s forever. I designed the movie for this moment.”

Chbosky is especially enthused about the deleted scene, “The Poem,” in which Charlie recites a poem for his group of eccentric friends at Christmas, moments before he gets his first kiss from Sam. That piece, written by the late Dr. Earl Reum, is Chbosky’s all-time favorite.

“I was given that poem and told that it was some kid’s suicide note,” he said. “That was the legend of that poem, and people passed it around. My sister gave it to me. Her friend, Pat, gave it to her. I wanted to include it in the book to spread the word as it had been spread to me. … Even though I knew that I was never going to include the poem in movie, I wanted to film it for the fans, and I wanted to film it as a tribute to Dr. Reum.

“I was trying to find that fine line between telling an emotional, intimate story, but not one that would burn an audience out,” Chbosky said of his decision to omit the scene from the film.

Perks ends with Charlie, Sam and Patrick at major junctures in their lives, having experienced quite the schoolyear together. As such Chbosky is often asked if he would ever write a sequel to the book. His answer?

“It would have to be worthy of the first [movie],” he said. “I could see myself spending six months trying to write another book and then ultimately finding, that it just didn’t have the magic. I would never publish it just to make some money. It would have to be the right fit. I have to say, I would love to get this group of young people back together for another chapter, if I could find the right chapter.”