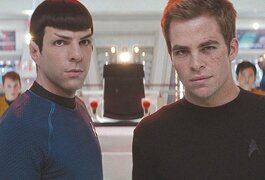 Star Trek, from Paramount Home Entertainment, easily topped both the Nielsen VideoScan First Alert sales chart and Home Media Magazine’s rental chart for the week. The film sold an estimated 5.7 million discs its first week out, according to Home Media Magazine market research — a figure that includes all of North America as well as the rental market.

Disney’s Up, the No. 1 seller the previous week, slipped to No. 2. Warner’s My Sister’s Keeper, a Nick Cassavetes-helmed drama that earned $49.2 million at the box office, debuted at No. 3, while Universal Studios’ Bruno, with $60 million in domestic theatrical earnings, bowed at No. 4.

Excitement about the theatrical opening of The Twilight Saga: New Moon sent the original Twilight, released to the home video market last March, back up to No. 5 on the sales chart.

On the Nielsen VideoScan Blu-ray Disc sales chart, Star Trek was the easy victor — not surprising, considering that nearly 38% of total first-week sales were of the Blu-ray version.