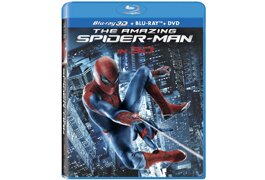 Directed by Marc Webb (500 Days of Summer), the film stars Andrew Garfield (The Social Network) as Peter Parker, and recounts how he gained his superpowers after being bitten by a radioactive spider, and must use his gifts to track down the a misguided scientist (Rhys Ifans) who turns himself into a giant lizard. Emma Stone (The Help) stars as love-interest Gwen Stacey, with Denis Leary as her father, the police captain. Sally Field and Martin Sheen star as Peter’s Aunt May and Uncle Ben.

The film has grossed about $260 million at the U.S. box office and more than $735 million worldwide.

The superhero reboot will arrive on DVD ($30.99), a three-disc Blu-ray/DVD combo pack ($40.99) and a four-disc 3D combo pack ($55.99). All versions include access to a digital copy through UltraViolet. A limited edition gift set ($95.99) that includes the 3D combo pack and figurines of Spider-Man and the Lizard also will be available.