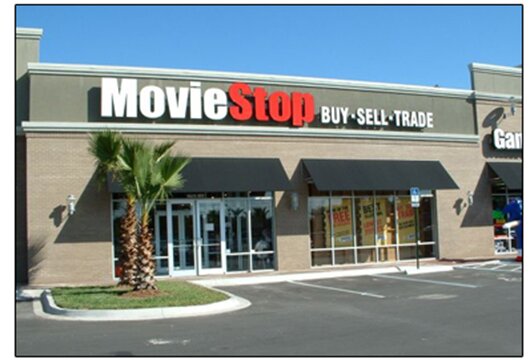 Deal results in a near 170-store retail base throughout the southeast, northeast and Texas

MovieStop, the Atlanta-based retailer of used packaged-media movies and related trend merchandise, has been acquired by Draw Another Circle LLC, owner of Amarillo-based retail chain Hastings Entertainment. Financial terms of the transaction were not disclosed.

MovieStop co-founder and CEO Russ Howard will continue as president and COO, as will the MovieStop brand name. No management or personnel changes were announced. The privately held chain of 44 stores in 10 states has for more than a decade operated a buy-sell-trade business model gleaned from its days as a subsidiary of video game retailer GameStop.

“We’re excited, this is a [great] opportunity. We share their vision. Our cultures are very aligned, and we are very optimistic about the future. This is a great partnership for us,” Howard said in a telephone call.

To Joel Weinshanker, CEO of Draw Another Circle, MovieStop is another piece to a multifaceted entertainment retail consortium. A former investor in Hastings Entertainment, Weinshanker bought the 126-store chain this summer for $21.4 million.

More importantly, Weinshanker contends there remains a strong market for packaged media when combined with trend merchandise and related products.

“We believe in and support the future of physical media and in the innovation and growth of our great vendor partners,” Weinshanker said in a statement.

Alan Van Ongevalle, president and COO of Hastings, said the addition of MovieStop enables the Hastings to extend its business model across new territories while embracing previously-viewed product.

“We have enhanced our stores and expanded our merchandise offerings, we have a format that works, and now our focus is on growth,” Van Ongevalle said in a statement. The addition of MovieStop to the Draw Another Circle family helps to extend our reach of product … at a fraction of the cost of what it would take to build new stores.”

For MovieStop, the impact can already be seen in stores, which increasingly feature action figures, T-shirts, buttons, pins and posters related to movies and TV show characters.

“They have a lot of expertise in the trend [retail] area that we embrace and really adds to our portfolio of products. That’s certainly a good near-term opportunity,” Howard said.