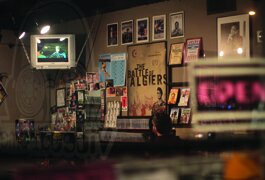 Independent video retailers have weathered many storms, but a number of them are hanging in there

John Tiratsuyan, owner of Video Hut in Hollywood, Calif., looks up and down the street from his Santa Monica Boulevard store and sees what everyone sees: Nearly all the chain video stores are gone.

“They had so much overhead; it crushed them,” he said. “The competition has just gone away.”

That’s leaving Redbox and Netflix as the main competitors for independent video store owners. Entertainment research firm The NPD Group estimates Redbox ended the first quarter of 2013 (March 31) with a 46.9% market share of the physical rental market, up 6% from the same quarter in 2012. The market share for online physical rental services — mainly Netflix — fell 1.9% to 24.8%, while the share for national rental chains dropped 1.3% to 13.2%.

Meanwhile, independent video stores saw their market share up for the third straight quarter, according to NPD data, with a nearly 1% increase to 10% during the first quarter (compared with the same quarter in 2012).

The number of chain storefronts continues to shrink. Family Video spokeswoman Alina Salganik said the company today has 767 stores in 19 states, while Blockbuster estimates it will be down to approximately 500 stores nationwide by the end of the second quarter of this year.

That number includes both standalone video stores as well as small-market (less than 150,000 population) drug and grocery stores that handle rentals.

“They’re still alive and well, contrary to what some people think,” Engen said. “Most of these independents are doing really well, whether it’s because there’s a lack of competition in smaller towns and there’s only one or two sitting there, or because they diversified. They had to get into other things.”

“Are the numbers down? Yes. But they’re not dead,” he added. “These guys are survivors, and they’ll make it through.”

Video Hut’s Tiratsuyan admits that business for his 30,000-plus disc rental store is still down — as much as 40% from five years ago — but that’s partly because of Redbox and partly due to the Internet, he said.

Brian Augustine, owner of Video Vision in Duluth, Minn., has also seen other video stores come and go since he first opened his doors in 1983. Today, his store is one of only two video stores left in the town of nearly 100,000 people.

“I think it’s our service [that keeps the business vibrant],” Augustine said. “I’ve had the same managers here for 20 years. We know everybody, we know what they like, and they trust us. Customer service says a lot.”

Like a lot of independent video store owners, Augustine credits low overhead with part of his store’s continued existence.

“We buy the right number of titles. We keep costs down. We learn how to diversify. We buy, sell and trade,” he said. “We’ll keep doing what we’re doing. I have to because I don’t know how to do anything else.”

Jen Koogler, marketing coordinator for Scarecrow Video in Seattle, said her store stays relevant by offering both new releases and rare, out-of-print, foreign and independent films. The independent store brings in film talent for events and is even opening up a screening room at the front of its massive store.

“We offer a lot of things that you just can’t find elsewhere,” Koogler said. “The video store rental business is still in decline, consistently down the last couple of years, and Blockbuster and Hollywood Video haven’t been relevant for a while now.”

Scarecrow’s story began in 1988, with original co-owners George and Rebecca Latsios starting out with an inventory of about 600 titles. Today, Scarecrow lays claim to one of the largest rental inventories in the United States, with approximately 117,000 individual titles.

Redbox kiosks are presenting the biggest challenge, and “are getting closer and closer to us,” Koogler said.

“But there are only so many titles that you can find in that tiny box,” she noted. “You can’t treat a movie like a can of soda. It’s heartbreaking to me.”

Matt Booth, owner of Videodrome in Atlanta, said the drop in brick-and-mortar stores has had a positive effect on his business (which he opened in 1998).

“Compared to where we were a few years ago, it’s going good,” he said, attributing the rise in business to a lack of competition. “A lot of people got disillusioned with the choices at Redbox and Netflix, so they come to us.”

Videodrome specializes in independent content, documentaries and out-of-the-mainstream TV titles, and while the company does carry new releases, it only carries approximately 400 Blu-ray Disc titles (“They’re holding their own and paying for themselves,” Booth said).

Booth said independents are surviving because they did what Blockbuster and Hollywood Video failed to do: adapt.

“Listen to your customers,” Booth said. “Atlanta has changed a lot since we first opened, and so have we. I think that the most important thing a small business can do — and this can be hard and a lot of work — is to embed themselves in the culture — especially the film culture — of a community.”

That means sponsoring film screenings, hosting movie nights at bars and getting involved in neighborhood events.

“I believe customers recognize us as part of their community and want to be part of it,” Booth said.

Steve Pickard, owner of Movies Etc. in St. Cloud, Minn., said his store is holding its own, thanks to the loss of the chain brick-and-mortar stores and thanks to being in a town that “appreciates familiar faces.”

“There’s a perception there are no video stores around,” Pickard said. “It’s not true.”

Dan Zimmerman, who co-owns Total Entertainment Center with his wife, Peggy, in Zimmerman, Minn., has been at it since 1985, and recommends the same survival strategies as other video store owners: Diversify and offer more than kiosks can offer. But he is realistic about his prospects.

“We first battled the Wall Street chains and their crazy business strategies, which we all knew would never work, and once investor money was gone so were they,” Zimmerman said. “Now the independent video retailers who were there before the chains are left to fix the mess they created (99-cent rentals, etc.). Blu-ray has not taken off as well as expected … and I think a lot of it has to do with people not watching movies as often as they used to.”

Zimmerman said his disc-rental business is down 60% from just three years ago, and that “a lot of people don’t realize video stores exist anymore.” Competing in a town of 2,600 people that already has two Redbox kiosks is part of the problem.

“Although I don’t feel it will ever be like it was before,” Zimmerman said, “it might make a little bit of a comeback as people get bored with kiosk selection.”

Luverne, Minn.’s Palace Video & Tanning also has seen changes since its inception in 1984 in this town of less than 5,000 people, according to co-owner Larry Boll. Diversifying by adding a tanning salon and offering to buy and trade used titles has helped the store stay alive, he said.

“Our business has been holding pretty steady,” Boll said.