'Avengers' Debut a Marvel on DVD and BD Sales Charts 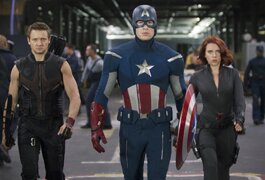 After a massive haul at the box office that tallied more than $623 million at U.S. theaters, Marvel’s The Avengers is unsurprisingly dominating the home video market.

The tremendous success of The Avengers helped bring all five of Marvel’s precursor films back into the First Alert top 25: Thor at No. 8, Captain America: The First Avenger at No. 13, Iron Man 2 at No. 14, The Incredible Hulk at No. 19 and the first Iron Man at No 23. The five films also reappeared on the top 20 Blu-ray chart.

All told, 72% of Avengers’ unit sales came in the Blu-ray Disc format, a record high for a new-release theatrical on disc in which both DVD and Blu-ray formats were equally available; 23% of total Avengers sales were of the pricier 3D Blu-ray combo pack.

The Avengers sold more than 34 times as many copies as the First Alert No. 2 title, Warner’s Batman: The Dark Knight Returns — Part 1, a direct-to-video animated adaptation of Frank Miller’s 1986 graphic novel. Returns also debuted at No. 2 on the Blu-ray chart, with 71% of its sales coming on the high-def format.

Universal’s Snow White and the Huntsman, which topped First Alert the previous two weeks, held on for No. 3 on both charts.

Among other new releases, the first season of TV series “American Horror Story,” from Fox, bowed at No. 4 on First Alert its first week, and No. 9 on the Blu-ray chart.

Fox’s Bond 50 boxed set of 22 James Bond films debuted at No. 4 on the Blu-ray chart, a nice performance for a multidisc collection that carries a price tag north of $100. Bond 50 landed at No. 11 on First Alert, with 91% of its unit sales coming on Blu-ray.

With Avengers delayed to rental outlets, Home Media Magazine’s weekly rental chart was topped for a second week by Lionsgate’s The Cabin in the Woods, the horror-comedy hybrid written by Whedon. Universal’s Battleship, coming off its kiosk embargo, rose to No. 2.